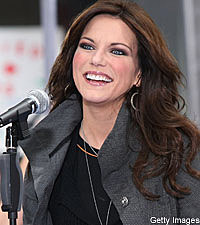 Martina McBride's summer tour calendar is filled with several fairs and festivals, including a couple of dates on this year's Lilith Fair trek, which has been spearheaded once again by pop singer-songwriter Sarah McLachlan. While this is not Martina's first time on the celebrated all-female tour, she is equally excited to have been invited once again.

"Lilith Fair to me -- I was part of it for two years the first time around -- was such an inspiring experience to me," explains the country superstar. "It was right before I did the 'Emotion' album, and I can remember being so inspired by how the tour was so inclusive. Once you got there and stepped off your bus, you were welcomed with open arms. Everybody got out and watched each other's shows. Nobody hid on their bus until show time. It was just a really cool vibe. And musically, it was inspiring to me, as well. It was right when Sarah's 'Surfacing' album was out ... I love that record."

The Kansas native even took a few tips from the atmosphere of the tour, readying herself for when she hit the road with her name as the first one on the marquis. "I can remember thinking, 'If I ever headline a tour, this is how I want it to feel on my tour. I want it to be happy and laid-back and really joyful.' And that's what I took away from that tour."

Martina is currently on the bill for August 10 in West Palm Beach, Fla., and August 11 in Tampa, Fla. However, there have been rumors swirling that some of the dates on the multi-artist trek, including ones in Nashville and the Sunshine State, have been canceled due to low ticket sales. Those dates are still listed on the official Lilith Fair site, but word has it an official announcement may be forthcoming soon.