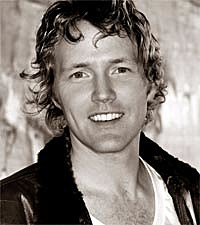 Think of Canadian singer-songwriter Luke Doucet's latest release 'Steel City Trawler' (out September 21) as something of a mix of rock, country, alt-country, pop and more, all rolled into one delectable sound.

The Hamilton, Ontario, native, who has been lauded with a host of Juno Award nominations and was the winner of the 2008 Canadian Folk Music Award for Contemporary Album of the Year, has this time crafted a disc that's a bit different and less folky than some of his past work. It puts him squarely in the Americana category ... but Luke says it's classic rock 'n roll.

"I bring [an affinity] for Gram Parsons -- country or alt-country," Luke tells The Boot of the album. "[Producer] Andrew Scott brings '70s punk rock. I said, 'Andrew, we share a common ground with the Beatles and the Rolling Stones.' When you have rock 'n' roll, it's like country and blues had a baby. What passes for rock today doesn't have any of the country or blues. When you say rock and not rock 'n' roll -- well, that's missing a large piece [of the classic music]."

Perhaps that's why critics are scrambling for comparisons with this record -- which is formally from Luke and the White Falcons -- citing everyone from Tom Petty to Joy Division and folk singer Gordon Lightfoot, whose classic song 'Sundown' Luke covers and makes his own. While some songs tilt more toward one genre or another, Luke describes the defining sound as a "swagger like the early Stones."

In developing the album, Luke says he and Andrew worked as true creative partners melding their influences. Of course, Luke is also well-known for his many influences and collaborations. Besides his solo work, Luke has been the lead guitarist for Sarah McLachlan since he was a teenager.

Luke is currently on tour. For a complete list of dates and cities, check here.