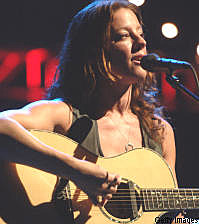 Lilith Fair organizers have officially announced the cancellation of 10 upcoming concert dates in North America. The revamped tour, first organized a decade ago by singer Sarah McLachlan and relaunched on June 27 with a lineup that includes country artists Martina McBride, Sugarland, Miranda Lambert and Loretta Lynn, among others, has according to Billboard suffered from sluggish ticket sales. The latest cancellations join already scrapped dates which were on the books for Nashville and Phoenix.

"We are in the midst of one of the most challenging summer concert seasons with many tours being canceled outright," Lilith Fair co-founder Terry McBride said in a statement. "Everyone involved with the tour would like to apologize to the fans and artists scheduled to play in these markets, and express appreciation for all the support for the festival's return. Lilith remains the only tour of its kind, and we are confident that fans will be amazed by what each date has to offer."

Refunds for the canceled dates are available at points of purchase. Organizers say that some of the artists set to appear at the canceled Lilith shows may appear on other dates.

Martina McBride, who recently touted the "happy and laid-back" vibe of the Lilith Fair experience, was scheduled to appear at the now-canceled West Palm Beach and Tampa shows. No word yet on which country artists will appear at future Lilith shows.

Billboard also reports that other summer concert tours have been in jeopardy, with many falling victim to high ticket prices in an economic downturn.

More information on the canceled show is available at Lilith.com.