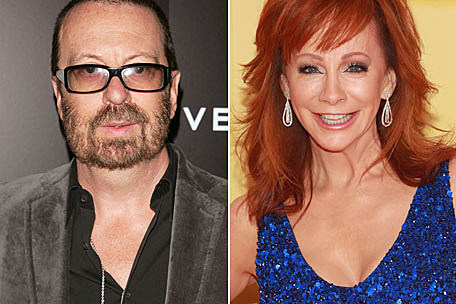 When you think about the idea of putting Reba McEntire, one of Nashville's most iconic singers who also acts, in "Malibu Country," a new TV sitcom that explores infidelity, divorce and the potential culture clash between people accustomed to the upscale California coastal town of Malibu and the more rural-minded folks for whom country music is a way of life, it's hard to imagine where a British-born pop and rock producer-songwriter-performer would fit in the equation.

But the truth is, the entire idea for the comedy series, which debuts tonight (Friday, Nov. 2) on ABC, sprang from the fertile mind of one Dave Stewart, who is perhaps best known as one half of Eurythmics, one of the most successful pop duos of all time, but whose time recording and producing albums in Nashville has without a doubt left a lasting impression -- and inspired more than just music.

"It was one of those things where I quickly put together these dots in my head," Dave tells The Boot, explaining how he came up with the idea. "Thinking that would be really interesting, having been in Nashville, to see Nashville from another perspective and LA from another perspective, from somebody in Nashville, like a fish out of water. Then I came up with this story about a messy divorce and the fact that she finds out through the divorce that he spent all the money. And there's a house on Malibu Beach and he's obviously been going there while he's been on tour and having parties or whatever. So, she has to start again with her mother [who's played by Lily Tomlin]. I was imagining someone like [famed record producer] David Geffen next door and this country family moves in, and he's sort of anal about how everything has to be perfect. Then showing the sort of crazy side of LA where everything is a certain way and seeing it through Lily Tomlin and Reba's eyes and showing some of the quirky things about people from the South. It's like two worlds. Reba is perfect because she has a house there and they had to go through this thing of having her son going to school there. She turns up at a school picnic and they had their sandwiches and people were eating sushi."

The multimedia-savvy Brit is someone for whom music, film, technology and creativity beautifully come together on pretty much a daily basis. A little serendipity doesn't hurt, either. In the case of "Malibu Country," a plane ride provided the opportunity to hone in on a country legend who would be just right for the part.

"At first I put just a famous country singer/actress," Dave explains of his initial pitch for the series. "But what was weird was I sat on a plane next to this guy and realized he had something to do with music. It was Reba's [step]son [Brandon Blackstock]. I said, 'Hey, I've got something I'd like to send you.' He gave me his e-mail but at first I think he might've thought I was something of a nut case because he didn't really seem to know who I was. It eventually got into Reba's hands and she [said], 'Whoa, hang on, I want to get back on TV, and this is exactly ... ' Then she realized who I was.

"I had asked Laura Ziskin to be my partner, she just passed away last year, she had cancer. But she was an amazing producer. Reba realized this was serious. She came to a meeting with Narvel [Blackstock, Reba's husband] and Laura and I, and we talked through it. We were all on the same page and quite quickly ABC said, 'we want this.' We made the pilot, Lily Tomlin came on board and it all just fell into place. Most people told me it's faster than they've seen something [develop for TV] before. And that was it! It's funny and it's kind of edgy. It's like these shows where everything is kind of speedy and it's loads of dialogue and lots of things happening."

Clearly, an environment where lots of things are happening is one in which Dave Stewart thrives. In the past couple of years, he has made two remarkable albums in Nashville, The Blackbird Diaries, named after Blackbird Studios, owned and operated by John and Martina McBride, and The Ringmaster General, which is also the name of a thoroughly entertaining -- and occasionally surreal -- documentary film about his Nashville adventures, featuring Martina, Alison Krauss, Big Kenny and the Secret Sisters, along with some of Nashville's most distinguished session players. In addition to his role as studio owner and recording engineer, John McBride is featured throughout the film as a bit of comic relief -- although that perhaps wasn't his intention -- by offering a glimpse into his somewhat obsessive-compulsive nature, which manifests itself in an unusual way, to say the least.