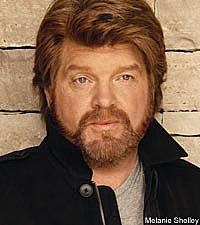 Coming off the success of 'Down the Road,' his recent No. 1 hit as both an artist (with Kenny Chesney) and songwriter, Mac McAnally is set to release his debut album on Toby Keith's Show Dog Nashville record label. 'Down By the River' hits stores tomorrow (Aug. 4).

Mac has pledged the royalties to the album's first single, 'You First,' to the Wounded Warriors Project, a charity that aims to honor and empower soldiers injured at war. Continuing his commitment to American troops, Mac also performed earlier this summer at the Kennedy Center in Washington, DC, honoring wounded soldiers as part of the Launching Challenge America initiative.

A celebrated producer, guitarist, writer and vocalist with ten previous solo albums, Mac has written for such artists as Alabama, Reba McEntire, Charley Pride, Sawyer Brown, Randy Travis, Steve Wariner and Jimmy Buffett. He was named 2008 Musician of the Year by the Country Music Association and is a member of the Nashville Songwriters Hall of Fame and Mississippi Musicians Hall of Fame.