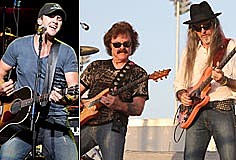 Luke Bryan will share the stage with the Doobie Brothers for the latest installment of 'CMT Crossroads,' which is set to air Friday, June 24 at 10:00 PM, on CMT.

The 'Country Girl (Shake It for Me)' singer confesses his admiration for the legendary American band, and the influence they have had on his successful career as a country artist.

"I am really excited to perform on stage with the Doobie Brothers," Luke affirms. "Their music was such an iconic part of my growing up. I bet most Americans can hear a particular Doobie Brother's song and have it take them back to a certain time and place in their life ... and the best thing is, they are still creating great music today!"

Pat Simmons of the Doobie Brothers echoes the Georgia Native's sentiments regarding the upcoming collaboration.

"We are so pleased, and fortunate to be able to share the stage with Luke on 'Crossroads,'" says Pat. "We love the challenge of performing such wonderfully crafted songs with an artist like Luke, and his band. He's one of the most exciting artists on the country music scene these days. The energy, innovation, and soulfulness of the music he writes and performs, is right up our alley. We're dustin' off our country chops, and we look forward to having him join in on our songs. This is going to be a great experience for all of us, and fans of both country music, and rock 'n roll. It could only happen on Crossroads!"

Luke will join forces on the band's classic hits 'Black Water,' 'Long Train Runnin'' and 'China Grove,' as well as his own smash hits 'Do I,' 'Rain Is a Good Thing' and 'Country Girl (Shake It for Me),' the first single from his upcoming album, 'Tailgates & Tanlines,' due out August 9.