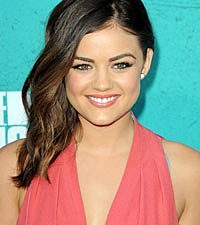 Actress Lucy Hale has signed an exclusive recording contract with Hollywood Records and is working on her first country album. The songstress currently stars on ABC Family's "Pretty Little Liars," which is in its third season. She joins a label that is part of the Disney Music Group, home to Demi Lovato, Grace Potter & the Nocturnals and the Plain White T's.

"I'm overjoyed and honored to become a member of the Hollywood Records family," Lucy says. "I've admired the careers they've made and can't wait to see how my musical path is paved out. I'd just like to thank [Disney Music Group Executive Vice President] Ken Bunt and everyone involved for giving me the chance to show a whole different side of myself, which is a huge passion for music."

The 22-year-old multi-talented performer is a native of Memphis, Tenn., and grew up on country music. She cites Shania Twain and Faith Hill as her early influences, however, she admits that it as Britney Spears' "Baby One More Time" video that made her want to pursue music professionally.

Lucy has showed off her vocal prowess on "Pretty Little Liars," as well as in ABC Family's musical comedy, "A Cinderella Story: Once Upon a Song." In addition, she's appeared on shows such as "How I Met Your Mother" and "The O.C," and in feature films, "Sisterhood of the Traveling Pants 2" and "Scream 4."

Lucy is scheduled to head into the studio later this year. A single and album are expected in 2013 on Lyric Street/Hollywood Records.