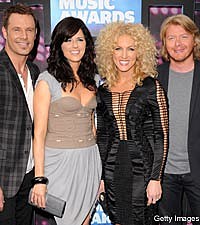 When Little Big Town return to the road with Sugarland on the duo's Incredible Machine tour, it will be a chance for them to catch each other up with what's being going on in their lives, as well as make some great music together.

"When we were on the road with them two-and-a-half years ago, we developed a great friendship with them and a great collaboration with them with 'Life in a Northern Town,'" Little Big Town's Kimberly Schlapman explains to The Boot. "It's going to be great being out with them again and rekindle the friendships. We don't get to see them that often because we're touring in so many different ways. We're excited about it, and maybe doing a little something together again will be fun."

For band member Karen Fairchild, the tour will be something more than just rekindling friendships -- it's a chance for her to work out! "It's a creative environment out there," she says. "They're hyper-creative people, and I just expect it to be a really great place for us. I'm looking to losing the last 10-pounds of my baby weight with their yoga instructor!"

Karen just gave birth to her and Jimi Westbrook's first child, Elijah Dylan, a few months ago, and while she looks amazing, feels she is a few pounds shy of her goal.

"It's going to be such a different tour than the Country Throwdown tour was with Montgomery Gentry. That's one extreme and this is the other," Kimberly adds. "This is the recovery tour," jokes Jimi, to which his wife exclaims, "This is [the] 'rehab your liver and lose the rest of the baby weight tour!'"

While they may joke about the Country Throwdown tour being one big party, and many nights it was, the quartet will also miss the camaraderie that happened between so many artists being together on the road. "We did do a lot of fun collaborations," says Phillip Sweet. "We sang with Jack Ingram out there on his 'Barbie Doll' moment, and then with Jamey Johnson, we did a song Jamey wrote called 'Macon.' It was just a really great creative environment out there too. Everyone was getting on each other's buses at night and jamming and playing music, and there was just music going on all the time. So, it was quite an experience, unlike any other."

Karen also says she developed some great friendships on the Throwdown trek. "I get texts all the time from Emily West and Sarah Buxton that say, 'I miss y'all. We miss y'all.' And we miss them too," she says. "It's a weird business to be in and it's such a privilege to get to do this for a living, but it's a little bit of a weird thing, so introspective. So, it's nice to be with other artists that are as weird as you are."