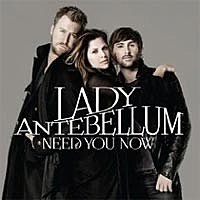 Lady Antebellum's 'Need You Now' remains at No. 1 on Billboard's Country Albums chart for the fifth consecutive week. Sales numbers for this year's seven-time ACM Award nominees dropped slightly from the previous week, but the group still moved 118,000 copies of the disc. They also retain their hold on the No. 2 spot on the all-genre Billboard 200. The group's self-titled debut is still in the Top 10, holding at No. 7 and now in its 98th week on the chart.

Johnny Cash's 'American VI: Ain't No Grave' debuts in the No. 2 position on the country chart, with 54,000 albums sold. The collection bows on the Billboard 200 at No. 3. Johnny's previous album in the Rick Rubin-produced series, 'American V: A Hundred Highways,' released in 2006, sold 88,000 copies in its first week of release.

Josh Thompson has the week's highest debut for a country newcomer, bowing at No. 9 with 15,000 copies sold.

Sarah Buxton has the week's 12th best-selling disc. She sold 8,000 copies of her self-titled album in its first week.

Taylor Swift hangs on at No. 3 with 'Fearless,' with the Zac Brown Band's 'The Foundation' and Josh Turner's 'Haywire' rounding out the Top 5.

Filed Under: Lady A
Categories: Albums, Charts
Comments
Leave A Comment
Back To Top