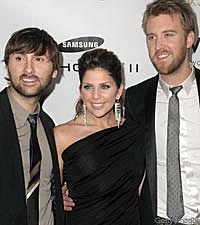 Lady Antebellum have just released their sophomore album, 'Need You Now,' and the trio remain amazed at the response the title track is still getting.

The five-week chart-topper was definitely a topic of intense discussion between the recent Grammy winners and executives at their record label. "The response from the get-go was so big," Charles Kelley tells The Boot. "I remember even having some conversations with the label and people were [saying], 'Oh no, hope they don't get offended by the 'I'm a little drunk and I need you now' [line]. And I [said], 'But that's honest! We're talking about country radio, right? What happened to the old Waylon [Jennings] songs and stuff and people said what [they felt]?' It's storytelling."

Lady A's Dave Haywood agrees, saying, "The three of us have been there, too. I mean, we've been in serious relationships and when you get out of that, all you want is that person next to you." Dave tells The Boot his parents are big supporters of the song, even with its pretty salacious lyrics. "My dad [said], 'Son, I love that song.' And [I said], 'Dad, what are you talking about?' He [said], 'I've been there.' When somebody that's 55 says that and then people our age understand it too, then maybe we struck a chord with something."

They definitely did strike a chord, and in fact, the group feels it could be their career song. "We thought 'Run to You' [the group's Grammy winner] was our career song," exclaims Charles. "But honestly, after 'Need You Now' came out and to see what it's done for us. It's been really, really, really, really huge for our career, and we're just really proud of it." [Really, Charles? We really wouldn't have guessed! Really!]

Lady Antebellum's 'Need You Now' album is out now. Charles, Dave, and third member Hillary Scott will definitely be playing some tracks from the new project when they hit the road with Tim McGraw for the superstar's 'Southern Voice' tour, which kicks off Feb. 11 in Omaha, Neb.

Filed Under: Lady A
Categories: Country News, Grammy Awards
Comments
Leave A Comment
Back To Top