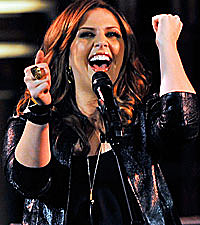 Lady Antebellum's Hillary Scott recently opened up about her upcoming wedding plans in a candid interview with Redbook Magazine. The 25-year-old singer graces the magazine's December cover (which hits newsstands on November 15) and tells all about her relationship with fiancee, drummer Chris Tyrrell.

Apart from being a day that calls for general revelry and celebration, the Scott-Tyrrell wedding provides an entirely separate perk for the remaining members of Lady Antebellum -- Dave Haywood, Charles Kelley and their road crew. "I'm not asking them to sing or play an instrument," she tells 'Redbook' (quote via People magazine). "I'm not putting anybody I love to work on my wedding day. I even told our band and crew that I know it's a weekend off that we wouldn't normally have, so if they want to take a vacation and not come, they're not going to hurt my feelings."

In regards to her fiancee, Hillary has certainly found Mr. Right. "Everything is brighter," she gushes. "Everything has a deeper meaning. I've found a guy who truly embraces me for who I am and appreciates the things that I don't necessarily love about myself. He makes me feel more comfortable in my own skin."

Hillary and Chris got to know each other while on tour with Tim McGraw. But as reported by USA Today, the two initially met in college: "We went to different schools in Tennessee and met through mutual friends," Hillary tells the newspaper. "I thought off the bat that he was really attractive, and I could tell that he was kind. Kindness just oozes out of him. I wanted to date him when I met him! And he just wanted to play basketball."

Filed Under: Lady A
Categories: Country News
Comments
Leave A Comment
Back To Top
Morgan Evans Knows 'Love Is Real,' and It's All Around Us