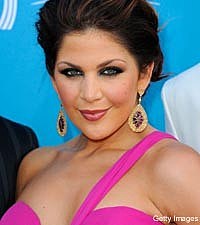 Before they flew into Las Vegas last week to rehearse for the ACM Awards, Lady Antebellum made a stop in Los Angeles to tape a performance of their crossover smash, 'Need You Now,' on 'American Idol'. In between rehearsals at the MGM Grand in Vegas, the band dished on what it felt like to perform on that famous 'Idol' stage -- which actually looked a lot smaller to them in person than it does on TV. However, the audience's larger-than-life enthusiasm made a huge impression on the country trio.

"When we were rehearsing and just the band was playing, we'd look out into the audience," Lady A's Hillary Scott tells Entertainment Weekly. "Without our voices, they were just singing along like they knew it. The (swaybots) are funny! They're all clapping to 'Need You Now' like it's a party song!"

And how's this for a bit of irony -- Hillary once aspired to play that small but famous 'Idol' stage. But apparently ... she wasn't good enough?

"I actually tried out for 'American Idol' twice and didn't get past the first round, if that gives anyone hope," she reveals.

Although they admit they haven't been able to keep up with this season's 'American Idol' while juggling a busy tour schedule, Lady A did find one contestant who particularly impressed them.

"There's a girl named Katie that I thought was really good," Lady A's Dave Haywood recalls, but sadly Katie Stevens was voted off the show. "When I watched, I couldn't stop watching her sing. I thought she had a great delivery, and I thought she was incredible. I'm sad to see her go!"

During an interview with Sirius XM Radio, Lady A singer Charles Kelley reflects on how tough it really is to break into the business -- even if you're already lucky enough to have your foot in the door.

"Talent is talent ... It's so hard to get a break. And I think ('American Idol') is honestly one of the greatest things. It's all about being in the right place at the right time.

"Even when we started, we had our foot in the door. My brother is Josh Kelley, and Hillary's mom is Linda Davis, who sang a duet ('Does He Love You') with Reba McEntire. So we already had a foot in the door -- like, 'Hey everybody, come check us out!' So we realize how hard it is to get discovered ... just to be heard!"