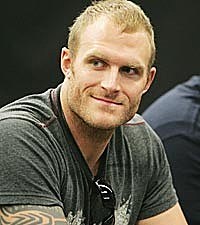 Kyle Turley knows what it's like to be a rebel. A former offensive lineman in the NFL with the New Orleans Saints, St. Louis Rams and Kansas City Chiefs, he has taken extreme risks on and off the field. They paid off when he was a 2000 All-Pro selection before his retirement from the game in 2007.

Everyone knows that a tough exterior often covers a kind heart, and Kyle is a first-rate example of this. For years he has supported the efforts of Gridiron Greats, a non-profit organization founded by NFL Hall of Fame lineman Jerry Kramer, with help from legends Mike Ditka and Gale Sayers. It supports retired NFL players who face dire medical and financial needs. On Saturday, February 5th, Kyle will join Ditka, Carmen Electra and over 150 celebrities including Hayden Panettiere for "The Best Party in Texas," a fund-raising event that will include entertainment and a silent auction. Tickets are still available at phone number (972) 983-4258.

The Boot was able to find Kyle on his Roll to the Bowl tour en route to Dallas and Saturday's event. He explained exclusively to us how he got involved with the work of the football charity.

"I started a tour last year I named The Roll to the Bowl in support of Gridiron Greats. This year is my second tour, & my goal is to build it into a annual event, bigger every year," he said. "Proceeds from my CD sales go to support this great organization, & I do everything I can to raise awareness about the issues dealing with retired NFL players. Some of my songs, like 'Final Drive' & 'Fly'n Helmets' speak directly to the reality the public does not see." The proceeds from "The Best Party in Texas" will be distributed among eight charities, including Gridiron Greats as well as others local to the Dallas area, where the Superbowl is being played on Sunday.

Kyle is best known to many football fans for an incident that happened in the 2001 season during a home game at the Louisiana Superdome with the New York Jets. After an opponent attacked his team's quarterback, Kyle's team loyalty instincts took over and he tackled the opponent, wrestling his helmet off his head and throwing it across the field. Kyle was ultimately fined $25,000 by the New Orleans Saints. The attacker against the Saints' quarterback was fined $20,000 by the NFL.

With this kind of stoicism and determination, it's no surprise that when Kyle decided to change his career from football to country music, he approached it with the focus that he has every other area of his life. ... . . He unflinchingly embraces both his past successes and struggles, and he has written about them in the songs of his debut release, 'Anger Management.' Imagine the collision of influences from heavy metal acts Pantera and Slayer with country rebels Johnny Cash and Hank Williams III, and you get the individual sound of Kyle Turley. Perhaps it might be called "metal country."

From his seasoned perspective as a former football player, does Kyle have any predictions for the outcome of Superbowl XLV, which pits the Green Bay Packers against the Pittsburgh Steelers? "I think it will be a pretty evenly matched game & fun to watch," he mused. "My pick to win is the Packers. The coaches on their staff are all ex-coaches of mine & I would like to see Aaron Rogers get the Brett Favre monkey off his back. But, I believe it will be a tight game - I'll say 21-14 Packers."