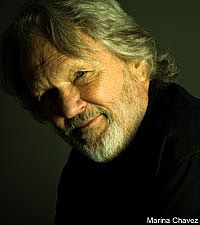 At 73, Kris Kristofferson has lived a life that transcends Hollywood legend. A Rhodes Scholar at Oxford, a serviceman, a movie star, a rebel, the songwriter of such classics as 'Me And Bobby McGee,' friend to the likes of Johnny Cash, Willie Nelson and Waylon Jennings, lover to Janis Joplin, Rita Coolidge and Barbra Streisand, father, and member of both the Country Music and Songwriters' Hall of Fame, Kristofferson defines the term "icon."

All of that living is reflected in his brilliant new album, 'Closer to the Bone.' Once again produced by Don Was, as was 2006's 'This Old Road,' 'Closer' finds Kristofferson in masterful troubadour mode, singing from the heart about friends like Cash ('Good Morning, John') and Sinéad O'Connor ('Sister Sinéad') as well as for his kids on the touching 'From Here to Forever.'

The Boot spoke with Kristofferson about the new album, how Cash came to his defense when he was ostracized by Nashville and why he refuses to change his outlaw ways as he gets older.

This album includes a tribute to your late great friend, Johnny Cash, called 'Good Morning, John.' And that was actually written some time ago, correct?

Yes, it was. June [Carter Cash] was having a little dinner for a few friends like Waylon [Jennings] and Jesse [Colter] ... we were all at one table. And she asked me to write a song for it. I'm not very good at writing on assignment, but I thought this one came from the heart -- and it worked. I tried to record it one time when I had Willie [Nelson] and my band singing background chorus; they would echo me. When I would sing, "Good morning, John," they would sing, "Good morning, John." And I got to "I love you, John" and Willie sang, "He loves you, John." I said, "Can't you say 'I love you, John'?" And I think he's embarrassed, but I was laughing so hard I never finished recording.

So that answers the question of whether or not Johnny ever heard it.

Oh, yeah, he thanked me for it. It's always embarrassing when somebody does something praiseworthy of you. It felt kind of embarrassing, but I hope he liked it.

Did you ever ask Willie why he couldn't sing "I love you, John," or were you too busy laughing?

No, I was just laughing [laughs]. I think Willie thought that worked for me and not for him. I don't know. We all loved each other, in a way.

Another tribute on the album is 'From Here to Forever,' which begins with you saying, "This one's for my kids." I love the informality of that, which really runs throughout the album and makes it feel like a live show. Did you approach recording this album similar to a concert?

The last two that I've done, at Don Was' suggestion, I've done them pretty much just me and the guitar, and we put on some others. Stephen [Bruton] recorded with me, Jimmy Keltner played drums, and Don on bass and Rami Jaffee from the Wallflowers. His playing on that one that you mentioned, the one to the kids, just made me weep; he played a keyboard and an accordion extension. I felt like I did with the first one, the one that I did by myself, 'This Old Road.' I was afraid it sounded like a demo, just me on it and pretty stripped down, but I really like what Don did and the people he selected to play with us. I like it better the more I hear it. I start out insecure but I hope your reaction is typical.

Do you have a favorite track?

I think the one that works the best is the one to the kids, 'From Here to Forever.' I like 'Closer to The Bone' and particularly since this was Stephen Bruton's last album he worked on. I kind of dedicated it to him. Stephen played with me since he was a baby [laughs]. He was out on the road with us for almost 40 years and we were very close friends ... He had a couple of years fighting cancer and fought it long enough for me to call him up before he died.

Did he get to hear any of the new songs before he passed away?

He did, and I think he liked it. 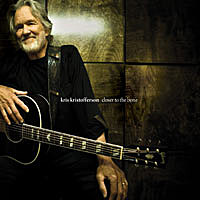 Are there any songs on the album that you really learned from?

I've always used the songs to make sense of my experience, and these all fit roughly in that category. 'Love Don't Live Here Anymore' is personal, it's person to person, but I said the other night, "George Bush was singing the song to Dick Cheney in the shower." I used to do that with 'Nobody Wins.'

Another song sure to get a lot of people talking is 'Sister Sinead.' It doesn't forgive her for so infamously tearing up a photo of the Pope on 'Saturday Night Live,' but it does somewhat humanize her actions. But that incident happened 17 years ago, so is it safe to assume this was another song you wrote a while back?

Yeah, it was some time ago because I remember I sang it for Waylon. But I had never recorded it and I thought, "Why not?" I think it's a good song.

Have you played it for her yet?

Oh, yeah. She heard it and I think she liked it. I'm not sure.

And despite how long ago it happened, some of the ideals remain very relevant.

Absolutely. there's still a lot of controversy going on about what's going on in the world and our role in it ... I felt like doing it because it hadn't been out there and it was best expressed, it seemed to me, as relevant today as any day.

Is this also a case of paying it forward, defending another outlaw? I just read a story you told about Johnny Cash defending you.

Exactly. John did that repeatedly for me [laughs]. I can remember him writing a letter to the editor of 'Country Music' magazine. And they had been critical of all the songs I was writing about what was going on down in Nicaragua and El Salvador, and there were some people who thought I was a communist or worse [laughs]. And John wrote a long letter to them really defending me, and it was really heartwarming.

Not all rebels are as lucky as you -- take the Dixie Chicks, for instance, with all of the anger directed at them for veering away from the conservative country norm. Why do you think you've been able to stay successful and respected in Nashville when you've been so outspoken your whole career?

There's a time where people were out holding posters in protest outside shows I was doing, and thankfully we've moved past that. And a lot of country stations wouldn't play me. They were more conservative than I was. 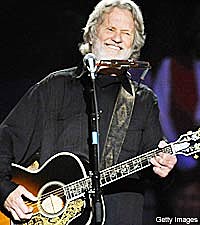 There's a long-running stereotype of how Westerners don't respect their elders, but that is definitely not true in entertainment. It seems like if you can last long enough in popular culture, all is forgiven.

You're exactly right. They respect the fact that you lived that long. I'm sure that a lot of people have come around to my way, but I was thinking just the other day how it's kind of odd that they say, "The older you get, the more conservative you get" and I just haven't changed [laughs]. I haven't got any more respectful, but I feel very grateful. It used to be I can remember times when people asked for their money back. One time in Atlanta, there was, like, 300 of them. Nowadays, people don't even yell at me; they're all very respectful. And I think it's, like you say, it just has to do with the fact that you have lasted this long.

Do you listen to a lot of contemporary artists?

No, I don't, and I'm not bragging about that. I'm embarrassed that I haven't heard any more than I have. Every time I turn on the radio I must be on the wrong song or something. But, to be honest, since I went on the road back in 1970 I didn't listen to radio music, because I didn't want to subconsciously steal somebody's stuff. I was writing and working all the time and I just didn't listen to that music, and it got be a habit, which I'm not proud of. [But] I just did a show with Steve Earle, and there were so many good things he was doing it just inspired me, so I'm gonna get back into listening.

The reason I was asking is I was wondering if there were any songs off this record you'd like to see covered, and if there was someone in particular you were thinking of to do it.

I hardly ever think that way anymore; it's been so long since anybody cut one. I hope somebody likes one enough to sing it. I know they can do it better than I do. I loved it when Willie cut 'A Moment or Forever,' and I was surprised and pleased to hear how well he did it. I wasn't surprised at how well, but just the fact that he did it 'cause he didn't tell me he was gonna cut it.

Is there a favorite version of one of your songs by someone else?

You know, I think one of the things that's great about being a songwriter is you get to hear other people that you really like interpret your stuff, and I was thinking 'Bobby McGee,' how many people have done 'Bobby McGee' that I loved, like Janis [Joplin] and Jerry Lee [Lewis]. It's one of the advantages we have over other art forms -- we get to hear what we do interpreted by people we respect. I would have a hard time finding one thing that I didn't like.