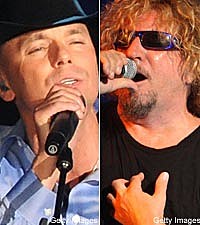 One could only imagine the collective gasp of millions of heartbroken fans all across the country earlier this year, when Kenny Chesney announced he wouldn't be touring in 2010. But last Friday night on the Las Vegas Strip,there was a collective gasp of quite a different kind, when Kenny strolled onstage unexpectedly in the middle of someone's show.

Robin Leach reports in Vegas Deluxe that Kenny appeared at the grand opening of rocker Sammy Hagar's flagship Cabo Wabo Cantina at Planet Hollywood's Miracle Mile. Sammy was able to keep his buddy hidden backstage until the country superstar joined him for a duet of 'I Fall In Love Again.'

Kenny was also spotted out and about in California the night before, attending the premiere of the film 'Invictus' at the Academy of Motion Picture Arts and Sciences in Beverly Hills, where he was photographed with actor Morgan Freeman, who co-stars in the film with Matt Damon.