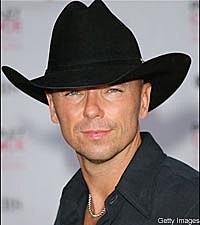 Kenny Chesney is looking to be inspired at tonight's Grammy Awards. As a songwriter, Chesney looks to his peers as influences.

Chesney will act as both performer and fan at the Grammys, playing alongside the likes of some of his own musical heroes.

"If you're creative, once you get into a room like this and there are all these creative minds occupying one space, there's something to pluck out of the air," he says. "So to be in a room full of people and to be a part of that room is one of the highlights of my career."

Chesney is particularly excited to share the stage with some of rock's biggest names. "I've been doing this since '93 now, and you can't look at a career like U2 and not learn something. Radiohead's a great rock band. No matter what genre you are, it's unbelievable. I'm looking forward to those guys.

Chesney is nominated for Best Country Collaboration for his duet with George Strait, 'Shiftwork.' See the full list of country nominees here.