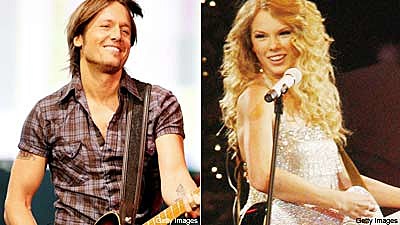 With the destruction and death toll continuing to rise in Haiti following the devastating earthquake that rocked the country last week, more than 100 artists are donating their time and talents for the worldwide televised benefit, 'Hope For Haiti,' including two of country's biggest stars.

"It's an unbelievable show," says the actor. "Bono's written a song for it and songs are going to be available on iTunes that night. People in Haiti have absolutely nothing. There are times when, as bad as it is for many people in this country, people also realize how much worse it is for them and they are very compassionate."

Hosted by George, Wyclef and CNN's Anderson Cooper, the two-hour telethon will air live and commercial free on more than 30 television stations, including MTV, CMT and all major networks. All donations will benefit several charities, including the Red Cross, UNICEF, and Wyclelf's Yele Haiti Foundation.

How You Can Help Haiti
Filed Under: Keith Urban, Taylor Swift
Categories: Concert News, Country News
Comments
Leave A Comment
Back To Top