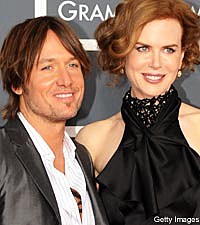 After taking part in the star-studded Hope for Haiti Now telethon last month, Keith Urban and Nicole Kidman are extending their efforts, pledging their unified, monetary support for school in in the earthquake-ravaged country.

"We're actually going to be funding a school down there for the next five years," says Keith (quote via radio station CatCountry 96). "It's in Port-Au-Prince. The kids will also have one hot meal a day. They'll have all of their medical taken care of by the school, and clothing, as well."

Last month, Keith and Nicole were among those who attended a $5,000-per-person brunch to raise funds for long-term relief for Haiti. The couple pledged $50,000 a year for the next five years in support of the cause. The one-day event raised $4.5 million for immediate emergency relief and also for long-term relief, so that the plight of the people of Haiti will not be forgotten once it is out of the news.

The long-term effort to fund a school is being spearheaded by Nicole and her friend, Oscar-winning director Paul Haggis through the Artists for Peace and Justice organization, which will also be funding several other schools through privately-raised monies in months to come. Haggis and his wife are personally covering all expenses and overhead of the relief organization, to ensure that every penny raised goes directly to the relief effort.

How You Can Help Haiti
Filed Under: Keith Urban
Categories: Country News
Comments
Leave A Comment
Back To Top
Miranda Lambert Explains How 'The Marfa Tapes' Came to Life