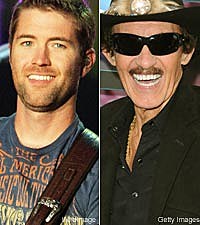 Country music fans aren't the only ones getting to meet their heroes this week at CMA Music Fest. "I got to cross something off my bucket list yesterday," Josh Turner told the crowd at his fan club breakfast Friday morning. "I got to meet the king -- Richard Petty."

Josh got a chance to chat with the legendary NASCAR driver when they ran into each other while doing radio interviews during CMA Music's Premiere Radio Remote. A NASCAR fan who spent his high school and college days following Petty, Cale Yarborough and Davey Allison, Josh shared a few other items on his bucket list with fans during a Question & Answer session at his annual fan club gathering. Among his other goals -- to be inducted into the Country Music Hall of Fame and to see a Duke vs. North Carolina basketball game at Duke University.

Josh hosted 400 fans for breakfast at Nashville's Cannery Ballroom. Cracker Barrel Old Country Store provided a down home country breakfast and fans won door prizes. They could also bid on a signed guitar, framed and signed photos from the video shoot for 'Why Don't We Just Dance' and other items available at the silent auction, with proceeds going to the Josh Turner Fund for the Arts and benefiting flood relief in Nashville.

"Y'all look good for this time of morning," Josh told the crowd as he took the stage to perform.

"Whose idea was it to have a morning fan club party? Oh yeah, it was me," he said with a mischievous grin.

Then announcing he had a song planned to wake everyone up, he launched into 'Fireracker,' backed by two guitarists, a fiddler and dobro players, a scaled down version of his regular touring band. "Yesterday I had fans come up to me from Australia, Scotland, France, Venezuela, Quebec and England," he told the crowd. "It's so cool for me to do what I love to do for a living and meet people from all over the world ... I want to thank everybody for your loyalty. You put the Cracker Barrel on my table."

Before singing his version of the sultry Don Williams hit 'I Wouldn't Be A Man,' Josh asked if there were any lovers in the audience. Several fans screamed "We love you Josh!" and he blushed and replied, "Some of y'all are too awake this morning."

During the performance portion of the fan club party, Josh served up such favorites as 'Long Black Train,' 'Everything Is Fine,' 'Your Man' and his new single, 'All Over Me.' He also surprised fan club members by introducing special guests the Accafellas, a male a cappella ensemble from Michigan State. Josh said his drummer had seen them on You Tube and brought the group to his attention. "These guys all piled into one little Volkswagon and stopped at every Cracker Barrel," Josh joked as he welcomed the group to the stage. They performed a stunning version of the Marc Cohn hit 'Walking in Memphis' and then launched into Josh's 'Would You Go With Me,' and as he joined the group on the last verse, the crowd went wild.

During the Q&A session, one fan asked Josh which actor would he want to portray him in a movie about his life. "Well it wouldn't be Morgan Freeman and Jessica Biel is out," he said smiling before finally citing Kevin Costner as his choice. When a fan yelled out, suggesting Ashton Kutcher, Josh said "I'd rather have Tyler Perry play me," and the crowd erupted in laughter.

Before launching in to the final song of the morning, Josh thanked fans for attending and said he hoped to see them tonight at the CMA Music Fest at LP Field. He then had one last surprise for attendees as he'd enlisted Earl Adcock and his family to make homemade ice cream for the crowd. Earl, who had met Josh when the singer contacted him about restoring an antique tractor, was smiling, shaking hands and sending fans on their way with the homemade treat. Josh and the band closed the party with his recent No. 1 hit, 'Why Don't We Just Dance.' Fans danced and cheered for their favorite artist and the singer/songwriter notched another great CMA Music Fest memory.