Unlike most girls her age, Jordyn Shellhart is in absolutely no hurry to grow up. She has a major label record deal, yet today -- August 12 -- is her first day back at school, as the high school junior prioritizes education first. Instead of rushing out to get her driver's license on her 16th birthday, Jordyn made her Grand Ole Opry debut on the big day. And instead of boasting to her classmates that she's now among country music elite as a Sony Music Nashville family member, she humbly keeps that part of her life to herself.

Growing up in Santa Rosa, Calif., Jordyn got her big break at the age of ten, singing the national anthem at a San Francisco Giants game. She moved to Nashville shortly after and was signed to Brad Paisley's Sea Gayle Music Publishing at age 14. The very next year, she scored her record deal.

Jordyn's first album, 'In a Room,' shows a songwriting prowess well beyond her 16 years. It's not that she's writing about adult issues, she's just found a way to relate to both her friends and her mom's friends through her tunes. The Boot sat down with the precocious young songbird to talk about her big country debut, the pros and cons of starting in the business so young, and those inevitable comparisons to Taylor Swift.

First of all, thanks for giving your new song, 'Save the Neighborhood,' to our readers for free! [Download it here.] What's the story behind that song?

The day of the inauguration, I went into a co-write and we just started talking about how we felt that day. Anytime something huge like that happens everyone's going to have an opinion, and the subject just turned into how badly we all want to make a difference. But changing the world seems really intimidating when it's so big and we're so small. In the end, though, the little things definitely add up. The bottom line is, if you want to save the world, you've got to save the neighborhood.

You've been doing a lot of co-writing. In fact, every single track on this album has your name on the writing credits.

Songwriting is important to me. It wasn't so much of a goal to co-write the whole album, it's just that I write all the time! That's my first love. I find songwriting inspiration absolutely everywhere -- in my life, in my friends' lives. As a songwriter, it's your job to think about song ideas all the time.

What's the most personal song on the album?

Definitely 'Heaven Knows,' a song I wrote about my brother, Taylor, who passed away. It poses the question of when someone leaves, what are they thinking and can they still hear me? With this song ... I'm not a big talker, so I deal with my emotions in a more musical way.

'Gravity' sounds like it really came from the heart, too.

I wrote that with my best friend Maggie when we were 13, during the summer after our seventh grade year. I was over at her house, and her parents made her really mad. And we were 13, so it was really dramatic! [laughs] So I took out my guitar and wrote a song about gravity and being held back. That song translates to me now, a couple of years later, when people try to hold me back -- this song has become therapy. 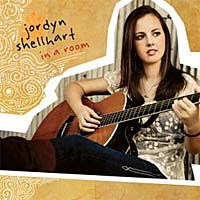 You write about boys on the album ... and then are you seeing those boys at school everyday? Has that ever resulted in an awkward situation?

There's a song on the album called 'I Don't Have to Wish at All,' and I sent a work tape of that song to the guy I wrote it about. But we didn't work out, and then a year later that song is on the album. So it's pretty awkward! [laughs] It's like, this is what I thought of you when things were good.

This is somewhat of a homemade album. Tell us about the recording process.

We hired one person to come in [Nick Culbertson] and play every instrument, except I play piano, and Blake Lindley and [my producer] Lex Lipsitz played percussion. We did it right in my manager's [Rick Barker] office. If you listen closely, you can actually hear dogs barking and doors closing in the background. We didn't fix any of that.

What went through your mind when you got the news that Sony Music Nashville wanted to sign you?

I was at home eating dinner, and my manager forwarded me the email that Joe [Galante, former head of Sony] had sent him with the first offer. It was such a defining moment in my life. My mom and I just sat there and stared at [the email]. The contracts took 11 months to go through, and then when the press release went out, it was so great to finally be able to tell people that my dream had come true!

And it was your mom's dream for you, too. She was the one who actually came up with the idea to move to Nashville, right?

Yes! She is the most supportive person in my life. She came home one day and had pictures of houses that she'd printed off her work computer and just said to me and my brother, "Y'all wanna move to Nashville?" [laughs] It was a spur-of-the-moment decision. She brought those pictures home in November, and we were here by March.

How do you think your young age helps you in this business versus how it might hurt you?

The pro is that I have a lot of energy. I go to school everyday and write everyday after school, and I don't get tired. The con is ... it's a little bit of a double take -- people hear the music and then they're like, "Wait, you're 16?" But then they listen a little bit closer to find faults. And if they hear my age before they hear my music, they might make assumptions.

I love Taylor; she's a huge influence on me. But musically, we are very different. Sure, you are going to see a lot of the same subject matter, because we're both writing about what we see, what we're going through as a teenager. And Taylor has influenced me in ways other than through music. She sent me an email when I was 12 years old, encouraging me and telling me, "I've been hearing your name around town ... Good luck with your music!" That just made me so happy. I couldn't believe she knew who I was. And that made me want to reach out to people who listen to my music.

What is the secret to reaching a fan base of both teens and adults?

People are going to relate to your music more if you write about something that's true to you. If something pertains to your life, people are going to feel the emotion in the song. What Taylor does so well is writing something for everyone ... and that's a goal of mine, too.

On the liner notes of your album, you thank Brad Paisley for letting you stalk him. What's that all about?

Musically stalk him! I wasn't hiding in the bushes! [laughs] I am just a huge fan. He owns my publishing company. We were at a Christmas party there and he walked in, and I just stopped talking. I was like, "Brad Paisley just walked in the door!" Everyone else was like, "Um ... of course he did."

After you got the record deal, was it a hard decision whether or not to stay in school?

It wasn't. Thankfully, my record label was 100% behind my decision. I wanted to stay in high school because it's an important part of life, socially and academically. And I'm inspired in high school! It helps me as a musician.

Do kids at school treat you any differently?

Not really, because I keep music and school separate. A lot of people didn't even know I sang until my album came out. So they couldn't really say that I bragged about it! And I have really great friends who are really protective of me.

What's your favorite subject in school?