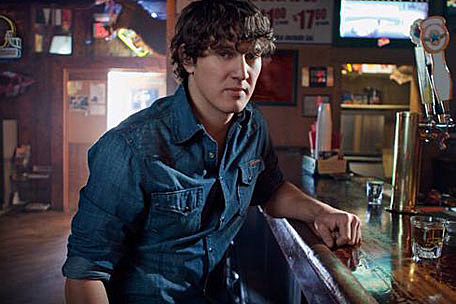 When you're a traveling musician, like Jon Pardi, tunes of longing all seem to be written especially for you. It's only fitting, then, that the video for his debut single, "Missin' You Crazy," depicts his ever-changing life on the road.

From show to show, the clip gives a glimpse into his backstage shenanigans as well performances. (Watch below.)

While the song could be interpreted as the desire to see a significant other, Jon may be singing it his best friend, Bandit. "He's two purebred dogs -- his mom was an Australian Shepherd purebred, dad was a purebred Queensland Heeler," he explains. "I got him at a year-and-a-half. Nobody wanted him because he barked all the time. All the neighbors would petition, because he barked so much, that he'd get kicked out. By the time I got him, his owners were ready to give him away, and the first time I got him he sat on my lap, just never got off my lap, and we've been best friends ever since."

The California native has been meeting plenty of people, who aren't musicians, that find the song relatable, though. "I've had a couple wives of military men say, 'My husband is stationed overseas and this is my song. I miss him so much.' I think it's the upbeat happiness to the song [they like]... it's a positive missing song. Even dudes on the road or stationed overseas, they like it 'cause they're missing their wives, missing their families. There's always somebody to be missed, but I've had a lot of good feedback towards people that have to be apart because of their jobs or what they do."

Jon is currently on the road. His next stop is Thursday (Aug. 23) in Cincinnati, Ohio. Get a list of tour dates here.