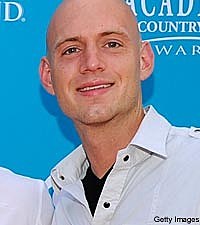 Jon Jones, bassist for the Eli Young Band, is officially a taken man!

Jon recently popped the question to longtime girlfriend, Sarah Guinn. The couple will tie the knot on January 29 in Jamaica.

"We have been together for nine years, almost as long as the band has been together," Jon told The Boot backstage at the Country Throwdown tour stop in Bristow, Va. "And we have a Boxer that's almost eight years old ... It's time!"

Although many musicians' families are along for the ride on the Throwdown tour, Sarah is sitting this one out. "She is putting the website together and doing all those wedding things that have to be done," Jon explains of his bride-to-be.

The big day for the wedding was set for January 29 due -- at least in part -- to practical reasons. "We don't have a show that day," Jon says. "January's [not a busy] time of the year for tours."

Jon and Sarah's wedding will be just about a year after lead singer Mike Eli's March 2009 marriage to Kacey Jann Herndon.

The Eli Young Band are currently on the Country Throwdown tour, which resumes June 12 in Salt Lake City, Utah and concludes June 20 in Mountain View, Calif. For a complete list of dates, check the tour's website.