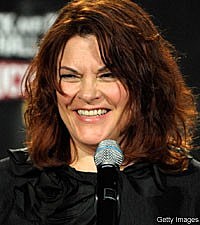 Of the life lessons she learned from her father, Rosanne Cash can credit one particular course of study with helping to shape her next recording project. Cash's new album, 'The List,' was inspired by just that -- a list her dad, Johnny Cash, gave her when she was 18 years old.

"He called it the '100 Essential Country Songs,' and said if I learned this list, I would be truly educated," the 53-year-old Cash tells Billboard. "We are culling about 15 songs from the list and re-interpreting them, with the respect of an archivist, the love of a daughter, and my own sensibility as a New Yorker for the last two decades."

Cash would not reveal any of the tracks on the album except for one: 'Long Black Veil,' which her dad famously included on his 1968 'At Folsom Prison' album. She also said there would be "a couple of guest artists" included on the record.

'The List' is Cash's follow-up to the Grammy-nominated 2006 release, 'Black Cadillac.' One of the most successful country artists of the 1980's, Rosanne Cash has charted eleven No. 1 singles, including the pop-country crossover smash, 'Seven Year Ache.'