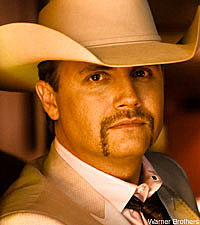 It didn't take a solo album for John Rich to make a name for himself beyond his wildly popular duo, Big & Rich. With a laundry list of songwriting and producing credits, on top of stints hosting two reality TV shows, Rich has been a driving force in Nashville for years. It just took a solo album for him to put his personal life to music.

Rich releases 'Son of a Preacher Man' this week, a CD of tracks that mirror his personality -- feisty, opinionated, passionate and reflective. The country mogul swung by the Boot's offices on a busy promotional tour to talk about his solo venture. The notoriously candid Rich also opened up about his new marriage, his "hell-raising" ways and the bone he has to pick with President Obama.

Your new single, 'Shuttin' Detroit Down,' is certainly hitting home with people in this tough economy.

I wrote 'Shuttin' Detroit Down' because I watched the news and just about lost it. The CEO of Merrill Lynch took some bail-out money and spent a million dollars remodeling his office, and somewhere in the world found a $38,000 toilet and bought it for his office. I thought, 'Is this what this world has come to?' There's a lack of reality and a lack of respect for American taxpayers. It struck me so hard that I wrote this song. As of right now, it's the fastest-rising single in the history of my career.

Is it safe to assume it's gotten the biggest response of any song in your career, as well?

It's the biggest positive response! [laughs] 'Save a Horse, Ride a Cowboy' got a big response, but it was either positive or people hated it. But 'Shuttin' Detroit Down' crosses lines of all Americans. It doesn't matter if you're a Democrat, Republican or Independent ... no matter what your race or religion is. Everybody sees this absolute nonsense going on everyday. People are losing their jobs; people are getting their 401-Ks cut by 60 percent. Then they turn on the news and see these guys in D.C. sending billions of dollars over to these other guys who blow it on private jets and bonuses. After a while, you feel like you want to revolt!

If you could sit in a room with President Obama and ask him anything, what would you ask?

Are the long-term effects of spending trillions and trillions of my grandkids' dollars worth the short-term blackjack move that he's making to stimulate our economy right now? I look at how he's doing it -- he has shoved all the chips on the table on one hand of cards and doesn't know what the next card is. He's holding the King and so is the dealer, and we don't know if he's going to flip an Ace or a six. I feel like it's taking an immense gamble, and one that's just within 60 days of being in office. That is way, way, way ahead of where it ought to be. He's a very intelligent man, so I'm sure he'd have a great answer for that, but that's what concerns me the most. 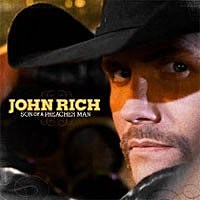 You've said that your new album is made up of songs that were too personal to be on a Big & Rich album. So which is the closest to your heart?

The title track, 'Preacher Man.' Imagine being the most hardcore, rock 'n' roll, honkeytonk singer in Nashville ... the wildest kid in town. But your dad is a fire and brimstone, Bible-banging preacher. He's never been judgmental, but I've never recorded a song that offended him. I've played him songs that he's said, 'Nah, I'd rather you not say that,' so I didn't record them. That's how much of an impact my dad has had on me. So I've got a King James Bible in one hand, and Crown Royal and Coca Cola in the other. That's just me. I'm a hell-raising Christian.

You show a vulnerable side on that song, yet there's also the song 'Everybody Wants to Be Me,' which is unapologetically confident. Which is a better reflection of you?

People say, 'Who does this guy think he is, getting out of a helicopter in a fur coat, drinking a cocktail, smoking cigars, being a big shot and tearing it up?' They say, 'I'd like to do that. That looks like a lot of fun.' And I say, 'Yeah, you want to do it, but I doubt you want to do what it takes to get to this point.' I started playing country music at 18, and I'm 35 years old now, so it's been 17 years to get to this interview right now. I've had three record deals, which means I've lost two. My career went from 100 miles-an-hour to zero in just one email. That's a tough thing to swallow. To go from being valuable to damaged goods multiple times is tough. But a lot of Americans think they're entitled ... What does the Constitution guarantee you? Happiness? No. The Constitution guarantees you the pursuit of happiness. But the pursuit is sometimes some pretty tough stuff.

Has Big Kenny heard the album yet?

I don't think he's heard it yet. He's been on mission trips to Africa, and he just had his neck fused three weeks ago. He's getting ready for our tour together. But as soon as I get my box of advance copies, I'll send one over to his house. Or maybe he'll go out and buy one today! [laughs]

You mentioned touring with Big & Rich, but I noticed you don't have any solo dates on the calendar. Was touring never part of the plan to promote this album?

We won't tour on this album until we sell some copies! [laughs] We've gotta find out if people like it or not. Big & Rich is one of the most fun shows out there. We've got such a huge fan base, that we decided to do a full-blown North American tour this summer, with about 30-40 cities. In the fall, if 'Shuttin Detroit Down' and [the next single] 'Good Lord and the Man' start doing well, you might see me touring at the end of this year and maybe into 2010. But I don't know what's going to happen. 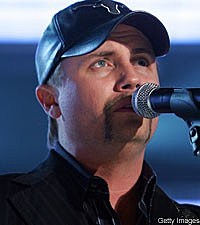 Will the next album be a Big & Rich album or another solo project?

It's probably a little early to tell. I don't see how in the world we wouldn't do another Big & Rich album at some point. We just have to get the songs, which takes a lot of writing and a lot of work. But one thing about Kenny is he'll never stop writing songs.

Congratulations on tying the knot! We were all surprised to hear you'd gotten married, because we didn't even know you were engaged. Why was it so important to keep your nuptials out of the press?

I see a lot of entertainers use their weddings as ways to promote their movie or record, or they'll sell the rights to the wedding to PEOPLE magazine or something like that. And that's fine if that's how they want to do it. But for me, I'm the total opposite. I think you've got to keep some things to yourself if you want to protect your sanity. I want to keep my family from media sharks who just want to take a bite out of your ass any chance they get. They're welcome to anything I've got in the music world, but when it comes to my family, that's off limits.

How has marriage changed you?

It definitely evens me out. If I have nobody to talk to and nobody to report to at the end of the day, with as wild as my life is, I'll wind up drinking too much, getting in too much trouble and my music would suffer. She's a great equalizer.

Is the song 'I Thought You'd Never Ask' a true story of your proposal?

'I Thought You'd Never Ask' is a song about her [wife Joan Bush Rich]. I proposed to her with that song. She bawled her head off, and then I put a gigantic diamond on her finger.

You've written with so many famed tunesmiths in Nashville. Is there anyone you've yet to work with who's on your dream co-writer list?

I want to write and record and album with Garth Brooks. I've only met him briefly and have never had a conversation with him. But if Garth would ever allow me to record him, to write a couple of songs and just stomp a hole through the floor in the studio with him, that would be a really big deal to me. I think he'd like me if he ever got to know me. A guy who swings on a rope but then can turn around and make 50,000 people bawl their eyes out -- he's the greatest country performer of all time. Maybe if he reads this interview, he'll give me a call! [laughs]

You're a songwriter, singer, producer, TV host, bar owner ... the list goes on and on. So besides singing with Garth, what's left on your career to-do list?

It would be cool to resurrect 'Hee Haw'! I'd love to have a variety show on a major network, emulating the philosophy of MuzikMafia. I'd be the host, but it would be musicians from all different genres, all glued together on the respect of music. It would make a statement about our culture in America, that we can overcome our differences by listening to each other's music ... bouncing our heads up and down to the same song, even though we grew up in different neighborhoods. That's the ultimate power of music.

When the music history books are written 20 or 30 years down the road, what do you want the MuzikMafia's legacy to be?

Who's tougher on you -- yourself or your critics?

There's no one tougher on me than me. I'm not scared of a critic. I'm really not scared of anybody other than myself. I'm pretty much the only one who can take me down! I'm going to record music that matters to me. I'm going to say the things I want to say. I have never been one to not voice my opinion based on someone not liking it. I figure if someone's not pissed off at me, I'm not rocking hard enough!