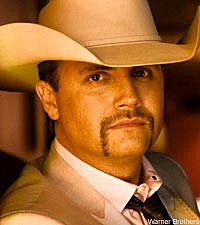 John Rich talked to The Boot about the third single from his solo album, 'Son of a Preacher Man.'

'Good Lord and the Man' is about my grandfather, 'Papaw' Rich. He had six purple hearts in World War II. He lied about his age and told them he was 18 when he was really 17, so they'd let him in the Army. He went over and became a bonafide war hero. There's a line in the song that says, "We'd all be speaking German or living under the flag of Japan, if it wasn't for the good Lord and the man." I don't think you can find an American who disagrees with that statement. When I wrote that line, I looked down at the page and thought, 'I don't know if I can say that or not.' But then I realized it probably won't upset people, because it's the truth! The World War II generation saved the world.

Download 'Good Lord and the Man' | Read the lyrics
Filed Under: John Rich, JohnRich
Categories: Story Behind the Song
Comments
Leave A Comment
Back To Top
Rodney Atkins Selling His $1.4 Million Mansion — See Inside!