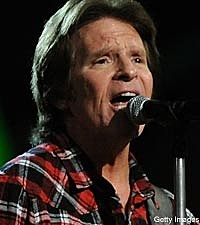 The sound of a lonesome fiddle ringing out from the stage of Nashville's venerable Ryman Auditorium just before the curtain rises is nothing unusual. But it was also no indication of what was to come when John Fogerty and his nine-piece band ripped into 'Hey Tonight,' and nearly a dozen other Creedence Clearwater Revival swamp-rock classics.

Sprinkled throughout Fogerty's blistering two-and-a-half-hour set were selections from the just-released 'Blue Ridge Rangers Rides Again' album, the long-awaited follow-up to his first country covers project in 1973. Tunes from the country-flavored disc which found their way -- and fit quite nicely -- into the set list included John Prine's 'Paradise,' the Everly Brothers' (and Linda Ronstadt's) 'When Will I Be Loved' and 'Back Home Again.' When he launched into Rick Nelson's plaintive 'Garden Party,' Rick's son Gunnar Nelson joined him onstage playing guitar and singing along.

But the rest of the night was all about John Fogerty and his myriad musical influences and directions -- from blues (a marathon session of 'Keep on Chooglin') to soul (an impassioned 'Night Time Is the Right Time'), to the radio-friendly hits that returned him to the pop charts ('Rock 'n' Roll Girls,' 'Centerfield' -- played on a Louisville Slugger-shaped guitar).

While he didn't have much to say throughout the night -- saving most of his interaction with the audience for a musical lull during which he repaired a broken fingernail -- it's clear the passion and excitement with which John Fogerty treats the 40-plus years worth of material he's recorded is still there. And with the expected encore of 'Proud Mary,' the audience was "rollin', rollin'' right along with him.

John Fogerty has just released a live DVD from another hallowed venue -- 'Comin' Down the Road: The Concert at Royal Albert Hall.'