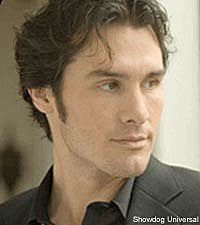 Joe Nichols recently celebrated a multi-week No. 1 hit with 'Gimmie That Girl.' While occupying the country charts' penthouse is nothing new to the singer, Joe says it means more to him now than ever before.

"I enjoy every minute, because there are going to be a lot of moments in your future that you're going to wish you held onto longer," Joe tells The Boot. "There's been a lot of really cool stuff that's happened to me throughout my career, and I remember everything, but I don't think I savored every moment of it like I should have or like I do now. Everything that's cool that happens, I look at my wife and I say, 'We need to enjoy this moment right here! This is really special!' I wish I would have done that more five, six or seven years ago."

When Joe reflects back on his career highlights, there are a handful of events that come to mind that he will always cherish. "Winning the ACM, winning the CMA, my first time on the Opry and having Grammy nominations were all a big deal to me," Joe notes. "Just being at the Grammy Awards was cool. I was rubbing elbows with Queen Latifah and Eminem ... Yoko Ono sat behind us!"

Asked to look down the road at something he'd love added to that list of highlights, Joe stays humbled by his recent success and just hopes for more of the same. "More than something I haven't done yet, I'd just like to continue doing what we're doing, which is making good records and hopefully continue giving the fans what they want and what radio will play."

Joe's latest single, 'The Shape I'm In,' was written by Rhett Akins, Dallas Davidson and Ben Hayslip -- the same writing trio behind 'Gimmie That Girl.'