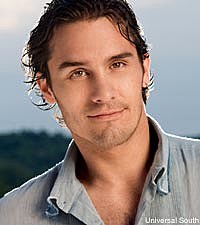 This year Joe Nichols plans to spend Christmas with his family in Jefferson, Texas.

Although Joe finds himself in a good place with his life now, times were often tough growing up, especially during the Christmas season. Joe recalls fondly how an entire community reached out to him and his siblings after his parents divorced.

"It was a very hard year on everybody," says the singer. "My dad was gone. We didn't have any money. I lived with my mom and my older brother. I was probably 11 at the time and my brother was 13. I have a little sister [Kelly] that was maybe a year old at the time [with] Down syndrome. It was really a tough Christmas.

"My mom sat us down, and said, 'Now look, this is going to be a tough year. We don't have a whole lot of money, we're barely getting by on food. Just don't expect any gifts. It's just going to be really rough. We'll try to do what we can, and take care of Kelly, but as far as you boys go, there's not going to be a whole lot.' So we kind of understood that's kind of how it would be."

And yet, recalls Joe, that's not exactly how it all worked out. "We lived in a little mobile home-type place in a little bitty segment of Pea Ridge, Arkansas. My brother and I went to this First Baptist Church in Pea Ridge -- really nice people who really cared about giving. This church group showed up at our door on Christmas Eve night with literally [big] lawn garbage bags full of gifts. They unloaded all of these gifts for us. To this day, it makes me want to cry. We had a great Christmas, and it had nothing to do with what kind of presents we opened. It was just that somebody went to the trouble of doing that for our family. I'll never forget that."

Joe's current single is 'Gimme That Girl' from the album 'Old Things New.'