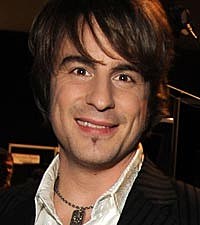 As Jimmy Wayne nears the end of his Meet Me Halfway trek to help raise money and awareness for teen homelessness, the grueling hours walked each day have been taking their toll.

"There are days on this walk across America that drag like a piece of fence being pulled around on a baseball field, and this asphalt treadmill is leading me nowhere. The pain in my feet is unbearable," Jimmy tells The Boot. "My mind drifts away like someone falling out of love with someone they used to be crazy about. I feel like a zombie. I have to break up the monotony by doing something normal."

Last week while staying in Show Low, Ariz., Jimmy did indeed find a way to get his mind off the walk for an evening of laughs and music -- but not just any music. Jimmy entered himself into a karaoke contest being held at a nightspot in the small town, although he didn't enter as himself.

"I entered the karaoke contest under the name 'Barry Wong,' a name of a politician I'd seen on a sign 20 miles back from Show Low," Jimmy says with a grin, adding that he knows it was "very wrong" of him to do. "The contest was being held in a bar, like one of those bars where you could get your butt kicked over a dart game." 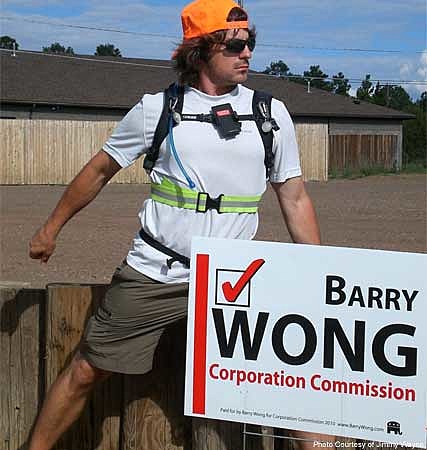 However, Jimmy's prank didn't end there. "Not only did I enter the contest wearing a black cowboy hat and skiing goggles, but I wore a pink tank-top and danced ... lets not call it dancing," Jimmy hastens to add. "Julianne Hough is a dancer. The moves I had were nothing you'd see on 'Dancing With the Stars,' except in the audition bloopers. I knew that I'd raise some brows and could possibly cause a brawl."

Once Jimmy ... err ... "Barry" took the stage, he began belting out the Brooks & Dunn hit, 'Neon Moon.' "One cowboy said to another cowboy sitting on the front row, 'You hold him, and I'll hit him!'" Jimmy recalls, laughing. "I just kept on dancing and singing out of tune! Finally they booed me, and the house lights began to come on one by one. That only meant one thing: get out, and get out fast!

"In some ways, I guess being adventurous is normal for me," he continues. "Like walking across America ... I could have just kept on walking and there wouldn't be a picture of me in that stupid pink shirt!"

A video of Jimmy's karaoke prank can be seen here. And he isn't the only artist who has taken to the karaoke stage in disguise. Two days following Jimmy's stunt, his Valory Music labelmate, Jewel, followed in his footsteps and went undercover to fool the crowd at a Santa Monica, Calif. karaoke bar while singing her own songs as "Karen." Watch her hilarious video here.

Jimmy is nearing the final weeks of his 1,700-mile walk which he launched on New Year's Day. To keep up with Jimmy on the remainder of his walk, follow him on Twitter.