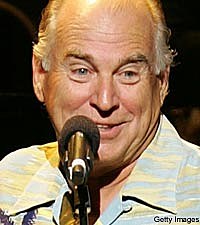 OK, so it wasn't an island in the Caribbean, but it looked like could have been -- judging by the Hawaiian shirts, shorts and beach balls in the crowd -- as Jimmy Buffett played New York City's Madison Square Garden last week. "It's great to be ending the Summerzcool tour on an island," Buffett told the Manhattan crowd, as he and his famed Coral Reefer Band brought the sound of the tropics to the Big Apple.

Buffett spent the next three hours serving up a seemingly endless cocktail of hits and throwing in a preview of his Dec. 8 release, 'Buffet Hotel,' including the tracks 'Summerzcool' and 'Surfing in a Hurricane,' which he introduced as the only surfing song he's ever written.

During the first half of the show, the timeless singer wowed the crowd with such favorites as the Rodney Crowell-penned classic, 'Stars on the Water,' and 'Five O'Clock Somewhere,' an Alan Jackson hit that featured Buffett. For the live version, Mac McAnally performed Jackson's part. Before launching into the song, Buffett playfully introduced Mac as the CMA "Magician of the Year," a nod to his recent CMA Award win in the Musician of the Year category.

"I like that you have an awareness of time at this point in the show," Buffett commented after 'Five O'Clock Somewhere,' "because you might lose that later on!" He then launched into 'Boat Drinks' and continued whipping the crowd into a frenzy with 'Changes in Latitudes, Changes in Attitudes,' 'Volcano,' 'Cheeseburger in Paradise,' 'Come Monday,' 'Son of a Sailor' and 'One Particular Harbor,' before closing the first set with another new tune, 'Lot to Drink About' from 'Buffet Hotel.'

"Welcome back from recess!" he said as he launched into the second half of the show, as the crowd cheered and the party vibe continued. Early in the second half, he gave the audience another taste of the new album with 'Nobody From Nowhere' and 'Surfing in a Hurricane.' He followed with such perennial favorites as 'Southern Cross' and 'A Pirate Looks at 40' before declaring "Margaritaville is Manhattan tonight!" and launching into his signature song.

"I thought all the landsharks had come to Jones Beach last summer," he said referring to an earlier tour date in the area, "but we've got some in the city tonight." He performed the hit 'Fins' as the most everyone in the crowd did their best dancing shark impression.

Though most music lovers associate Buffett with summertime fun and outdoor venues, he proved he could turn Madison Square Garden into an island paradise with an endless parade of beach videos and fun clips of Parrotheads living it up at this shows. But most of all it was the music that transported the crowd from a chilly night in the big city to a tropical state of mind. The evening ended with two encores and a wildly enthusiastic standing ovation.

It was obvious the affection was mutual. "41 years and we're still standing," Buffett said to the crowd, "thanks to you."