After almost a decade in the music business, Jessica Simpson has finally found her voice. The 28-year-old Texas native has made the risky transition from pop to country, insisting country music is rooted in her past and everlasting in her future. The first product of this career move is 'Do You Know,' Simpson's country debut that she hopes will steal the spotlight from her personal life.

"I hope that it gets people back to Jessica Simpson the singer," Simpson tells The Boot. "In today's society, people are so celebrity-obsessed. And for some reason, we're all wanting to hear the worst about everybody. I find that so cruel. I just really want people to see my heart through my music ... I'm coming from a place of honesty and strength, and hopefully people can hear that in my voice."

Simpson co-wrote all but three tracks on the album and says each and every song hits a personal chord. That's a statement that has tongues wagging, as the album is packed with lyrics about heartache -- something she has gone through very publicly in the past. So which former celebrity flames are the subjects of these songs?

"I don't say who they're about," answers Simpson. "A lot of people have been asking me about specific guys, but that sort of information is sacred to me. I want people to relate to the songs themselves, not think about me and whoever it's about." 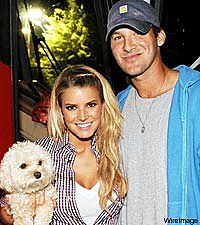 The one exception she makes is for the song, 'You're My Sunday,' which she wrote about her current flame, Dallas Cowboys quarterback Tony Romo.

"He inspires me to be a better person," Simpson says of her boyfriend of almost a year. "He just makes my life peaceful. In the midst of all the chaos, the gossip, the tabloids and people's expectations of me, it's nice to know that a guy loves you for who you are. So 'You're My Sunday' is dedicated to him."

Simpson mourns love lost in tracks like 'Sipping on History' -- "the song that makes me cry," she says. But she gets a little more feisty with guys who've wronged her in songs like 'When I Loved You Like That' ("the song that makes me bitter and angry") and the powerful 'Remember That,' which encourages an abused girlfriend to leave her man for good.

"I've been broken, and I've had the pieces put back together," Simpson explains of the CD's darker lyrics. "Writing this record was an extremely therapeutic experience ... Throughout the album, I think you realize a constant message: learning from your weaknesses and becoming strong again."

Simpson shows her sexy side on the album's romantic title track, written by Dolly Parton, whom she calls "an incredible writer, an amazing lyricist and just a great role model."

You can add "pretty funny" to that list, as well. Simpson tells us the recording session for the song, on which Parton sings background vocals, was full of laughter.

"After she sang her part on the song, she looked into my dad's video camera and said, 'Well, Jessica sang her butt off. I sang my butt off. So now we're two blondes with no asses!'" Simpson recants, laughing.

From legends like Dolly and Willie Nelson to younger superstars like Kenny Chesney and Martina McBride, Simpson says the new Nashville clique she's trying to break into has been "very welcoming" thus far. As for the fans, she's happy to report that her old fans have crossed over with her, and she's having fun with the challenge of turning skeptics into new fans. To Simpson, it's all about starting over.

"I want to meet as many people as possible," the songstress explains. "And when you're promoting something you love and that's really close to your heart, it makes it a lot easier ... I want to go in and be considered a new artist, because I really am. I feel like I'm 19 all over again. I have butterflies; I'm anxious; I'm nervous ... But it's all worth it."

Jessica Talks Tabloids, Tony and Carrie
Filed Under: Jessica Simpson, JessicaSimpson
Categories: Albums, Interviews
Comments
Leave A Comment
Back To Top
POLL: Who's Your Favorite Country Singer From 'The Voice'?