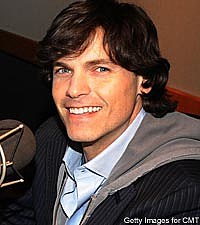 Jaron of Jaron and the Long Road to Love made a second version of the music video for his tongue-in-cheek revenge single, 'Pray for You,' to give some backstory on why he's so bitter about his ex in the song. He apparently even came close to casting his real-life ex, actress Kaley Cuoco, in the role of his girlfriend in the clip.

Kaley stars in the CBS sitcom 'The Big Bang Theory,' and Jaron says he thought she might have been the perfect choice, but they eventually went with actress Jaime Pressly, best known for her role as Joy in 'My Name Is Earl.'

"They wanted a video that answered questions like what happened to this guy, and why's he so angry, and show it in a dark comedic way," Jaron tells CMT. "Originally, I wanted my real ex to do it. I think she would've really tried to kill me in the video, and that could have been really funny too!"

Luckily no blood was shed in the making of the second video for the hilarious tune. 'Pray for You' is currently climbing the charts and is the first single from Jaron and the Long Road to Love's album, due in June.

Jaron and the Long Road to Love - 'Pray for You' Video

Download Jaron and the Long Road to Love Songs

Filed Under: jaron and the long road to love, JaronAndTheLongRoadToLove
Categories: Country News, Music Videos
Comments
Leave A Comment
Back To Top