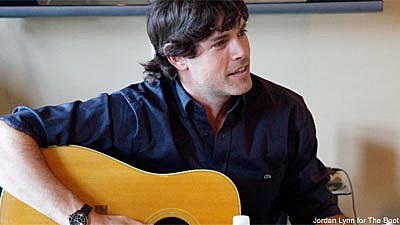 Jaron and the Long Road to Love's Jaron Lowenstein is a popular guy. The singer's phone rang more than a dozen times during the course of our 'Day in the Life' video shoot, with one very important call coming while he was chatting with his "frans" (combination of "friends" and "fans") on Facebook.

"They want me to play this Saturday ... two songs?" Jaron asked the mystery caller, visibly stunned and excited.

Turns out the caller was Jaron's manager, telling him he'd just been invited to play the Grand Ole Opry. "I swear I didn't stage this," Jaron said, looking into our cameras and laughing.

It was a call that if you told him a year ago he was going to get, he would've laughed at you. That's because Jaron never planned on being a country star. Simply put, his fans made him one.

"I've always heard about country music fans and how great they are, how they support artists like crazy," Jaron told The Boot. "But the difference between me and other country artists is that they [the fans] actually made me. I didn't go to a record company or radio stations to get to the fans. I just went there directly. My Facebook and MySpace fans are getting credit for this, for bringing me to the masses. We started this together and are doing this together."

Those fans are the people who heard Jaron's new song, 'Pray for You,' and called country radio stations to request it. And called ... and called ... and called -- making the song now a Top 20 country hit (and rising!). It's the first single from the upcoming Jaron and the Long Road to Love album, 'Getting Dressed in the Dark,' due for release on June 22.

The CD is Jaron's first as a solo artist. He found musical fame more than a decade ago with his identical twin brother, Evan, in the pop duo Evan and Jaron. The Georgia-bred brothers' eponymous 2000 album featured three Top 40 pop hits, including what became their signature song, 'Crazy for This Girl.' They followed with 2004's 'Half Dozen,' which didn't measure up to the success of its predecessor but did see the two venturing into more country-leaning territory. 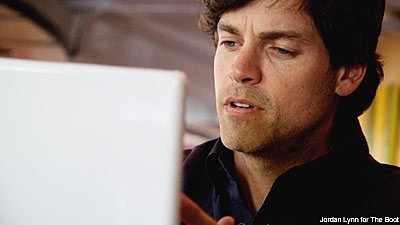 When Evan settled down and started a family, music took a backseat. But Jaron, who's still single (much to the delight of his sea of female fans), kept making music. And that music was, for the most part, inspired by failed relationships. Thus the answer to the question Jaron says he gets on a daily basis: "What's with the name, 'The Long Road to Love'?"

"It's my story," he explained. "It's this guy, Jaron, and the story of his journey to find love. At this place in my life, I'm writing about relationships. And unfortunately, more times than not, I've gotten my heart broken. So I'm sharing these stories ... and right now, these stories are about a long road to love. Maybe the next [album] will be 'Jaron and He Found Her'!"

And although Jaron and the Long Road to Love may sound like a band name, Jaron is indeed a solo act, often performing with just himself and a guitar or piano. But every now and then, he might welcome a familiar face onstage. After all, Evan is still very much a part of his music.

"My brother [is] absolutely the first person I call and the opinion I trust most," Jaron answered us when asked who he looks to for musical advice.

The Boot started our whirlwind day with Jaron at the Edgehill Studios coffee shop near Nashville's Music Row, where he went to get both his caffeine fix and "fran" fix. "I do this literally every day, sometimes for hours," Jaron says of checking in with his friends/fans on his social networking sites. "They keep saying, 'Is it really you?' It's really me! I get a lot of 'frans' who say to me, 'Wow! Thanks for doing this. Must be a lot of work.' But this isn't work! If I could spend ten hours a day doing this, I would."

And that's not because the singer needs a daily ego boost. In fact, Jaron sees his fair share of negative posts on Facebook, Twitter and the like, mainly from those who take offense at 'Pray for You' and its humorous story of using the religious act of praying to wish bad things upon an ex-girlfriend ... And then there are those who just like to give him a hard time.

"Sometimes people go on there to make fun of me," Jaron said while scouring through the dozens of new posts on his Facebook wall, "which is fine, because I make fun of myself at least once a day, if not twice."

Prying himself away from his "frans," Jaron needed to tend to that surprise Opry call, so we accompanied him to Paradigm Talent Agency, where he met with his manager to discuss a set list for his appearance on the legendary show. And this wasn't just talking about songs and writing them down on a piece of paper. Jaron actually took out his guitar and played several new tunes for us, including the clever love song, 'That's Beautiful to Me,' and second-chance-at-love tune 'Petals Back on the Rose' -- both of which show a very different, softer side to the singer.

Those songs, along with 'Pray for You,' are found on Jaron and the Long Road to Love's upcoming album, which needed a bit of last-minute tweaking on the day of our shoot. So we followed the singer to County Q Studios, a no-frills recording facility in a tiny house just south of downtown Nashville, where his sound engineer, Jimmy "Flash" Dulin, was there to play the final mixes for us. ("We call him 'Flash' because he's so fast ... it's phenomenal," Jaron says of Jimmy's talents in the studio.) 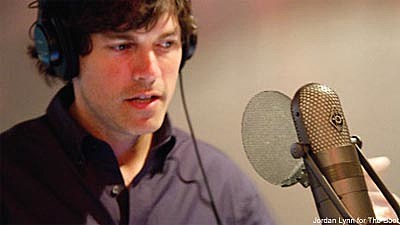 "This, right here, is where we made the record," Jaron explained of County Q, which resembles a bachelor pad with its plush couches, lava lamps, well-stocked beer fridge and and bowls filled with Hershey Kisses, into which the singer dove, succumbing to his admitted "bad chocolate habit."

After tweaking a few verses of piano and vocals on 'That's Beautiful to Me,' Jaron had to rush out to make an appointment at Big Machine Records, where he sorted through several photo options in making his final decisions for the album art. "This one makes me look like Justin Bieber's dad," he joked of one picture. "And this one -- I'm all styled up like a Jonas Brother."

It was just another in a long line of self-deprecating jokes Jaron made throughout our 'Day in the Life' shoot, which ended with a party. The entire Big Machine Records staff gathered at the end of their work day to sip wine, munch on hors d'ouvres and hear, for the first time, 'Getting Dressed in the Dark,' track by track.

"This record is an honest story about me," Jaron told the table full of record label executives, each of whom the charismatic singer knew by name. "So I want your honest opinions."

The enthusiastic applause after each and every song said it all. But it also left Jaron wondering, what should be the next single? The question sparked a debate in the room, with several votes going to the sentimental 'That's Beautiful to Me,' while others wanted Jaron to stick with his kiss-off theme, voting for the humorous 'I Hope You Hit Traffic.' And all agreed, he should pitch whatever song he chooses to country radio, sticking with the genre that's welcomed him with open arms.

"Everybody loved Evan and Jaron, but nobody cared," Jaron told The Boot. "That's why I'm brutally honest. You might say I'm obnoxious, too! [laughs] And I am obnoxious ... but the only thing that I'm better in the world at than anybody else is being me."

Pre-Order 'Getting Dressed in the Dark'

Download Jaron and the Long Road to Love Songs

Filed Under: jaron and the long road to love, JaronAndTheLongRoadToLove
Categories: A Day in the Life, Exclusives, Music Videos
Comments
Leave A Comment
Back To Top