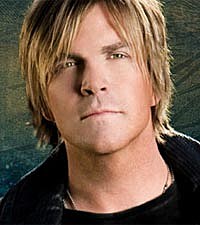 It's been nearly two years since Jack Ingram released his 'Big Dreams & High Hopes' album, and the fans aren't the only ones anxious for new music.

"I'm going into the studio soon," Jack tells The Boot. "It's just a different process for me this time. I've had a grand amount of success in the last six or seven years compared to what I did in the first 10 years of my career. I've made a ton of new fans, and there's been a lot of growth in my career."

The 'Wherever You Are' singer is focusing on finding the perfect songs for this new album. "Now I have ears that are waiting for music from me, and it's the least I can do to be completely truthful with that music," he explains. "I have to try to be as authentic to myself and my own vision of what my music is supposed to sound like to me. I owe that to myself and my fans. That's the only way for me to take another step on the ladder."

That's the career ladder, of course, that he concedes is a steady climb and not a race.

"I'm not a headliner," Jack acknowledges. "My goal has always been to be a headliner. Now, whether I'll get there or not, I have no idea. The only way I'm going to get there is to make music that is authentic to me. Not that this other stuff the last five years wasn't. To get in the door, you make a few compromises here or there. I'm eyes-wide-open about that, but to make the next step you have to be completely real. That's what this next record is going to be, and I'm very excited to be making new music."

That being said, Jack's determined to not let any outside influences affect his process. "I will have complete creative control over what I do," he reveals. "I read a great interview with Ricky Gervais, where he was talking about 'The Office,' which he created -- the UK version and ours. He was talking about how it was so hard to get that off the ground, because he allowed zero compromise. It would not have been the same show, and it would not have worked, if he had allowed any outside influence. That rang true to me. My music isn't brilliant, like his comedy is, but in order for it to work, it doesn't fit in any slot. It's a unique thing. If I allow any outside influence or compromise, it makes it unrecognizable from what it should be."

While Jack is very clear on what type of music he wants to make, the Texas native is not entirely sure where he'll record it. "That part of the process hasn't been decided on," he says. "I love musicians in Nashville. The quality you can get out of them, there is none better. Wherever I can find the best guys, who understand what I'm trying to go for: that's the most important thing. Whether it's Nashville, Austin, Los Angeles, New York or Timbuktu, I don't care."

Jack has spent a lot of time recently scrolling through his iPod, rediscovering songs that he'd like to put on the next album. "I found an old song of Kevin Welch's that I love called 'Millionaire,'" he reveals. "Someone told me that Chris LeDoux recorded it before, but I've never heard that version of it. That's a song, though, that I've found and really fell in love with again. There's a new record by a friend of mine who writes, Lori McKenna, and she's got some great songs. There's a couple that I've cherry picked. One is 'You Get a Love Song,' which hopefully by saying that some other artist won't go cherry pick it from me. [laughs]"

Although he's been listening to a lot of outside songs, the singer-songwriter is still doing what he does best. "There's a of songs that I've written, too," he admits. "I don't know if they're hit songs, but I don't care. They're really speaking to me. They feel like the right songs to record."

To get a sneak peak of some of Jack's new music, check out his 'Acoustic Motel' webseries here.