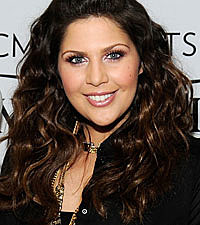 Lady Antebellum's Hillary Scott is still a newlywed, but that doesn't stop folks from asking her when she and hubby Chris Tyrell plan to start a family.

"I can't wait to have children -- one day," Hillary shared backstage at the recent ACM Awards. "Lady Antebellum is on tour right now and we are touring heavily through the end of June and then we go to Europe in July, so there's just not much time for that right now."

Hillary did assure fans that she and Chris would definitely be thinking about children "some time in the future" but gave no specific time frame. The couple were married in January of this year.

On another family matter, the trio's Dave Haywood admits he's been seeking wedding planning advice from his two bandmates, who've already been through the experience. "I have asked Hillary and Charles a few things because I would like to get both the female and male perspective on wedding planning," Dave explains. Dave asked girlfriend Kelli Cashiola to marry him last December, but a wedding date hasn't been announced yet.

"It's such a huge honor for us," Charles Kelley says. "I've seen him several times in concert. He is one of the biggest influences for me as a writer and singer. I think he is one of the best songwriters of all time."

The group also looks forward to their May 16 performance in Louisville for the winners of their Own the Night prom contest. The juniors and seniors of Henryville High School won the honor because the Silver Creek school in West Clark, Ind., submitted their name after tornadoes damaged the school in March.

"The whole thing was Hillary's idea," Charles explains. "We had released 'Dancing Away With My Heart,' which takes a lot of people back to their prom date or first love. Hillary said, 'Wouldn't it be cool if we crashed a prom?' When all the stuff happened at Henryville and they were nominated, it was cool. We had a conflict with their actual prom night but we'll do a bigger event for them in May."

A modest Hillary says, "It was one of those things where I was thinking about the song and the title of our album, and just thought 'Own the Night' would be a fun prom theme. It wasn't that long ago that I was there myself. To see the idea grow and build with what it's become, and to see what all has come of it is great. We just want to bring that community joy and hope and do whatever we can to put smiles on their faces."

Fans can catch Lady Antebellum with Keith Urban, Vince Gill, Exile and the Oak Ridge Boys at the All for the Hall event at Nashville's Bridgestone Arena Tuesday (April 10). The show will benefit the Country Music Hall of Fame and Museum.