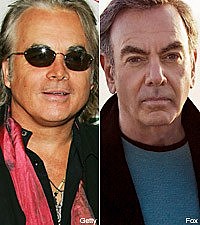 If you're a songwriter and performer who can inspire jealousy in a legend like Neil Diamond, you must be doing something right. And that's apparently just what singer-songwriter Hal Ketchum did with his brilliant new album, 'Father Time.'

Recorded live in a Nashville studio over a two-day period, with all of the musicians playing at the same time rather than relying on overdubs and fancy studio tricks, 'Father Time,' is the very definition of 'old-school,' something to which the pop icon could immediately relate.

"I gave it a real good listen and, you know what, I enjoyed the heck out of it," said Diamond in a letter he dashed off to Ketchum after hearing the album.

"I met Neil about 15 years ago in Nashville," Ketchum told The Boot in a recent interview at the studio where 'Father Time' was recorded. "I went to his house and we wrote a couple songs. I got to play rhythm guitar on a Neil Diamond record which was huge for me. Having Neil Diamond write anything about me is kind of like painting Picasso's house."

As a songwriter, Hal Ketchum lives with what must be a dizzying array of characters rolling around in his head. And often when he introduces someone in a song, even he isn't quite where the character is headed. A perfect case in point from the new album would be the smarmy guy at the center of the biting, hilarious 'Continental Farewell.' He's based in part on Christopher Walken's 'The Continental' from a popular 'Saturday Night Live' sketch.

"That was the springboard," said Ketchum of the song that takes a surprising, comical turn. 'And we thought, 'If we're going, let's go all the way with it.' Taste takes a holiday."

Although subtle humor has often found its way into the 55-year-old Ketchum's repertoire, the country hitmaker whose best-known hit singles include 'Small Town Saturday Night' and 'Past the Point of Rescue' has gleaned inspiration for material not only from his personal life but from observations as a world traveling musician.

"I've never met anyone who didn't have a story," said Ketchum. "Everyone has a story. We're all pushing the same rock up the hill."

Spurred on by a conversation with his musician friends lamenting the fact that they never get to play in the studio together anymore, but rather most often record their parts separately sometimes days or weeks apart, Ketchum decided to record 'Father Time' as a real group effort, choosing fraternity over technology.

"Some of the greatest records I've ever heard are when you get five or 10 people in the same room together just riding the wave. And so I thought, 'I'm going to try that.'"

Still, not everyone was convinced the idea was a good one. "I was talking to somebody about a week before the sessions," Ketchum said, "and they said 'Dude, you should have a parachute.' And I thought, no. If I know, and the players know that there's some kind of backup, all that fear and apprehension is going to dissipate. And that could be a very important part of this. Nobody should be the one who wants to fall off the son of a b----. Everybody should be on the edge of their seat."