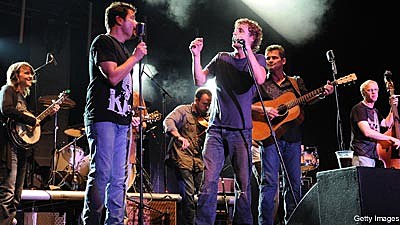 "That's bluegrass music right there, y'all!" yelped Jamie Johnson of The Grascals, as fellow band member Kristin Scott Benson mesmerized the July 8 audience at Nashville's Ryman Auditorium with her blazing banjo. He was not kidding. For some 75 minutes, the two-time International Bluegrass Music Association's Entertainer of the Year winners plied their captivated crowd with music that alternately crooned, wept, erupted, energized, prayed, and sparkled, putting their own stamp on one of the most traditional of genres while kicking the gates wide open.

The Grascals' appearance at the Ryman was the third installment of the annual summer Bluegrass Nights at the Ryman series, now in its 17th season. They followed earlier showings in recent weeks by Vince Gill and Ricky Skaggs & Kentucky Thunder. Renowned pickers J.D. Crowe & the New South gave an impressive opening performance before the Grascals took the stage, featuring the legendary Crowe with his banjo.

The Grascals have been around awhile, and are a group of musicians each with pedigreed backgrounds and abilities so stunning that it is no wonder that they reel in their audiences every time they take the stage. This night at the Ryman was no different. Having played and recorded with everyone from Dolly Parton to George Jones, Vince Gill to Ricky Van Shelton, the Grascals have the spirit earned by a band who has spent hard time on the road and the easy confidence that makes them and their music accessible to their audiences.

Currently opening for Hank Williams, Jr. on the concert circuit, the Grascals acknowledged Bocephus for helping them reach a broader audience for their music. "Hank told us to just get out there and be who we are, don't change anything, just play bluegrass music," said guitarist Jamie Johnson. "We have to thank him for letting us get out there with him and being so good to us and letting us bring bluegrass music to people."

The show opened with an eye-opening run of 'Happy Go Lucky, ' which immediately let the crowd know that it was in for something special. The blend of harmonies between Jamie, bassist Terry Smith and guitarist Terry Eldredge was spine-tingling, and made your soul glad you showed up for this night's performance. Even the more somber lyrics of 'Leaving's Heavy on My Mind' didn't dissuade from the instrumental and vocal virtuosity. This is a first-class band.

Then came 'Keep on Walking.' The attitude of the group is casual; band members stroll across the stage mid-song, whispering to each other, smiling or laughing, then languidly make their way back to their spots. It's as if playing at this level of mastery is as easy as brushing your teeth. There is no uniform; all were dressed in jeans, and could have just as easily been going to Shoney's for dinner as much as playing a concert on the stage of the revered Ryman Auditorium. The point is that none of it mattered but the music. It's obvious that the Grascals love this music, and they want to to share that love with the audience.

One way they were able to do this was by mixing styles of traditional and modern bluegrass. The instrumental 'Blue Rock Slide' clearly holds an old-time Celtic influence that sparkles with a call-and-response melody between especially the banjo of Kristin Scott Benson and Jeremy Abshire's fiddle. The Grascals continued their traditional vein by inviting their mentor and hero J.D. Crowe out to play with them on 'Sunny Side of the Mountain.' Crowe and Benson stood side by side, each experts on their banjos, and both were careful to not try to outshine the other.

The group is clearly forward-thinking and innovative, too, as was evidenced when they sang their latest single. They have taken a very decidedly "un-bluegrassy" song and poured the Grascals flavor into it (shaken, not stirred) and created a new creature with the Monkees' 'Last Train to Clarksville.' Those who remember the original pop version will find that the Grascals' interpretation may take a little getting used to - but in a good way. It's upbeat, well-played, and excellently sung. The video for the song is set to play on CMT and GAC in the weeks to come.

The audience, already thoroughly enjoying themselves, roared in approval when Dierks Bentley popped onto the stage for a short visit. Guitar in hand, he joined the group in singing the Waylon Jennings classic, 'Only Daddy That'll Walk the Line.' When he disappeared almost as quickly as he arrived, it seemed almost a shame to waste his appearance on just one song. But any lingering misgivings were soon quelled when the band launched into the bluegrass classic, 'Rollin' in My Sweet Baby's Arms.' The band cat-called to each other and the crowd shouted their approval of this hard-driving favorite.

Tenor singer and guitarist Terry Eldredge took the lead microphone for the title cut of the group's latest album, 'The Famous Lefty Flynn's,' followed by a charging take of the Osborne Brothers' 'Up This Hill and Down.' Then followed one of the most

fun pieces of the evening, a medley and tribute to their mentor, Hank Williams, Jr. The crowd sang and clapped along to the familiar words with a new bluegrass sound with slices of 'Born to Boogie,' 'Women I've Never Had,' and 'All My Rowdy Friends (Are Coming Over Tonight).' The band continued to pay tribute to those who walked before them. Terry Eldredge showed outstanding dexterity and abilities of fine diversity when he pulled off both the humor of George Jones' 'White Lightning' and the clear heartbreak of Merle Haggard's 'Today I Started Loving You Again.' The show ended in an instrumental free-for-all, showcasing each musician in turn displaying their exemplary talents and leaving the crowd in a happy high. If anyone thinks that bluegrass is an old-time, old people's music, they need only to hear the Grascals.

The Bluegrass Nights at the Ryman series continues on Thursday nights through July 29.