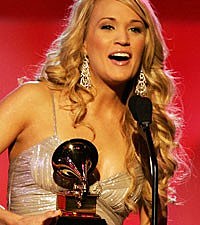 The Competition: Carrie may have been coming off of her 2005 'American Idol' win, but that didn't mean she was shoo-in for either of these honors. James Blunt's double-platinum-selling 'You're Beautiful' landed him the Best New Artist nod, while Chris Brown's two platinum singles 'Run It' and 'Yo (Excuse Me Miss),' Imogen Heap's film-friendly 'Speak for Yourself' and Corinne Bailey Rae's chart-topping debut album garnered their respective nominations. In the country category, the Oklahoma native's 'Jesus, Take the Wheel' faced songs from Martina McBride and LeAnn Rimes, who come in third and sixth, respectively, for the most nominations in the category. Not only did the songstress beat the odds, she came back and took the Country Female Performance category the next two years with 'Before He Cheats' and 'Last Name.' 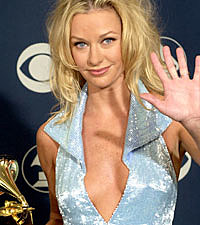 The Competition: "Thirteen years and six album to get here," Shelby noted during her acceptance speech. By the year 2000, the term 'new' didn't necessarily apply to the singer-songwriter. She had released her first album, 'Sunrise,' on Epic Records in 1989, and followed it with five more before the millennium, the last being 'I Am Shelby Lynne.' On the other hand, her fellow nominees were all straight out the gate and had either topped their respective charts -- Brad Paisley with 'He Didn't Have to Be' and Papa Roach with 'Last Resort' -- or had released multi-platinum albums, in the case od Jill Scott and Sisqó. Shelby took the trophy by being "an individual," as she acknowledged in her speech, and has gone on to release seven more albums since. 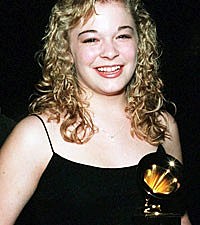 The Competition: To be 14 years old and have released an album is a triumph, but to be that age and win a Grammy was unprecedented. LeAnn became the youngest Grammy winner -- a record that still holds -- when she beat out Garbage, Jewel, No Doubt and the Tony Rich Project for Best New Artist. In the country category, the teenager faced the most-awarded female Grammy winner of all time, Alison Krauss, as well as Mary Chapin Carpenter, whose four wins in the category tied her for the most with Emmylou Harris. And let's not forget Deana Carter, whose 'Strawberry Wine' dominated the airwaves alongside Trisha Yearwood's 'Believe Me Baby (I Lied).' 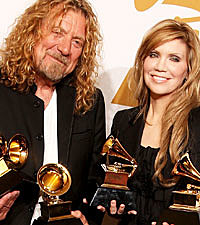 The Competition: Take the lead singer of Led Zeppelin and a bluegrass darling, and what do you get? 'Raising Sand,' an album that defied genre lines. The project's 'Please Read the Letter,' which never cracked Billboard's Top 100 tunes, went on to eclipse chart-toppers including Coldplay's 'Viva la Vida,' Leona Lewis' 'Bleeding Love' and M.I.A.'s 'Paper Planes.' The pair's platinum-selling album faced competition in the all-genre Album of the Year category from the triple-platinum 'Viva la Vida or Death and All His Friends' from Coldplay and 'Tha Carter III' from Lil Wayne. It also scored a Folk/Americana Album win, while producing two songs that took away Pop ('Rich Woman') and Country ('Killing the Blues') Collaboration trophies. 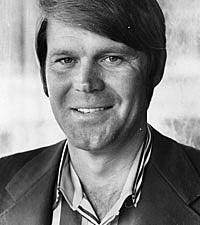 The Competition: To give you some perspective, in 1967 this award went to the Beatles for a little album called 'Sgt. Pepper's Lonely Hearts Club Band.' The following year, the foursome were back in the running with their follow-up, 'Magical Mystery Tour.' Simon & Garfunkel were also vying for Best Album with the No. 1, 'Bookends,' which includes the most recognizable hit from their multi-decade career, 'Mrs. Robinson.' Rounding out the competition were José Feliciano -- who made 'Feliz Navidad' a holiday tradition -- and actor-turned-singer Richard Harris -- yes, the first Dumbledore -- with his debut. Granted, Glen was was well on his way to superstardom, co-starring with John Wayne in 'True Grit' and hosting his own 'Goodtime Hour' on CBS-TV, but that didn't make it any less surprising when 'By the Time I Get to Phoenix,' a No. 1 country album, surpassed what has since become some of most popular music of the 20th century. 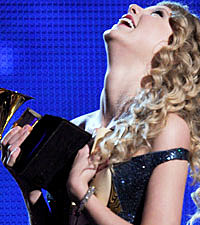 The Competition: When the nominations for the 2010 ceremony were announced, Taylor was named an astonishing eight times, second only to Beyoncé. The 20-year-old's sophomore release, 'Fearless,' took on the biggest stars of the year, Beyoncé's 'I Am ... Sasha Fierce,' the Black Eyed Peas' 'The E.N.D.,' Lady Gaga's 'The Fame' and the Dave Matthews Band's 'Big Whiskey and the Groogrux King.' Cementing her career in country, the singer-songwriter's 'White Horse,' which she co-penned, topped Jamey Johnson's critically-acclaimed 'High Cost of Living' as well as Billy Currington's wildly popular 'People Are Crazy.' In the Female Country Performance category, she ended Carrie Underwood's three-year winning streak, and in Country Album she surpassed Keith Urban's 'Defying Gravity' and the Zac Brown Band's celebrated debut 'The Foundation.' 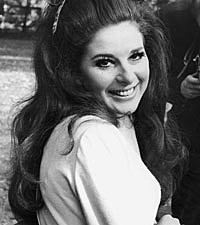 The Competition: On the strength of their mega-hits, 'Somebody to Love' and 'White Rabbit,' 1967 was the year of Jefferson Airplane, also New Artist contenders. When the envelope was opened and Bobbie's name was called, the South rose again, besting San Francisco's Summer of Love. The Mississippi native's 'Ode to Billie Joe' even prevailed over Record and Song of the Year winners 5th Dimension's 'Up, Up and Away.' Remembered as one of the first female country singers to write and produce her own material, Bobbie used her talents to bring country to the forefront of the music scene. 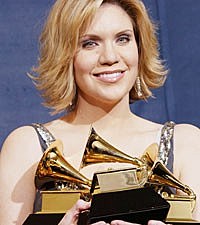 The Competition: Over the Recording Academy's 54 years of bestowing Grammys upon music's elite, Alison has been recognized more than any other woman. Her ever-evolving sound is reflected in the honors from her first in 1990 for Best Bluegrass Recording for 'I've Got That Old Feeling,' to her Best Country Female Performance for 'Baby, Now That I've Found You' in 1995 to her 13 wins with Union Station. The Illinois native's trophy case outweighs all of music's heavy-hitting ladies, with Aretha Franklin coming in second with 18, followed by Beyoncé with 16. The singer-songwriter-producer even in comes in third overall, behind the 22-year Chicago Symphony Orchestra conductor Sir Georg Solti (31) and Quincy Jones (27). 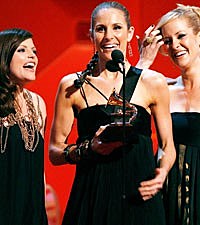 Wins: Album, Song and Record (all-genre), and Country Album and Country Performance By a Duo

The Competition: The country trio owned the 2006 Grammy Awards. Nearly three years after the now-infamous comment about George Bush, the trio released their first album since the incident, 'Taking the Long Way.' The album took the coveted multi-genre award from Gnarls Barkley, John Mayer, Red Hot Chili Peppers and Justin Timberlake. While the project's defiant lead single, 'Not Ready to Make Nice,' earned the Texas girls both overall honors for Song and Record of the Year, the tune also earned the two country wins -- ironic since the group didn't receive a single nod from either the Country Music Association or the Academy of Country Music that year. 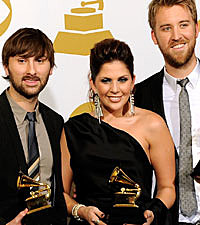 Wins: Record and Song (all-genre), and Country Performance by a Duo, Country Album and Country Song

The Competition: In April 2011, Lady Antebellum's 'Need You Now' became the most downloaded country song of all time. However, when the Grammys were passed out two months earlier, there was no indication that the trio would sweep, taking home the most gramophones of the night. They faced Cee Lo Green's hit 'F--- You' in both the Record and Song of the Year categories, as well as Eminem's smash 'Love the Way You Lie,' featuring Rihanna. The threesome walked away winning five of the six awards for which they were nominated -- Album of the Year went to Arcade Fire -- and gained the momentum needed for their third record, 'Own the Night,' to debut atop the multi-genre Billboard 200 album sales chart in September 2011.