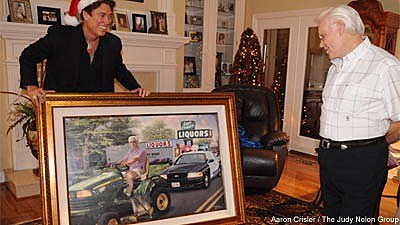 On Christmas Day, George Jones opened his door to a Santa Claus named Ronnie McDowell, who came bearing a very special gift. George's wife Nancy commissioned Ronnie, who is an accomplished painter as well as singer, to paint a photo depicting her husband's famous escapade taking off on a lawnmower in search of liquor.

"Well, I love you for this," George told his friend, according to the Portland Progressive. After looking over the painting, he added, "This makes my Christmas Day!"

Without hesitating, Ronnie responded, "I'm your biggest fan, and I want you to know this is my favorite painting I've ever done. What better subject could I have?"

The painting shows George on a lawnmower, riding down the road with a police car behind him. In the background is the liquor store he had just paid a visit when he was caught. The incident actually happened twice in the singer's life -- once when he was married to his second wife, Shirley, and the second time when he was married to Tammy Wynette. Both women hid his keys from him and refused to give them back when he wanted to go get more alcohol. In the former incident, he drove to a liquor store; in the second, to a bar close to his home.

"Well, you did a good job depicting this story of my old days in your picture," George told Ronnie, stressing that those days of reckless drinking are over.

This is not Ronnie's first painting of a famous singer. Several of his portraits of Elvis Presley are part of the book 'The Genuine Elvis,' which was released earlier this year. One of the most touching is that of a young boy, his back to the viewer, meeting Elvis, also holding a guitar. Ronnie is known for his songs 'The King Is Gone,' 'You're Going To Ruin My Bad Reputation' and 'Older Women.'

George, a member of the Country Music Hall of Fame, continues to make music. His latest CD is 'A Collection of My Best Recollection,' released exclusively through Cracker Barrel Music.