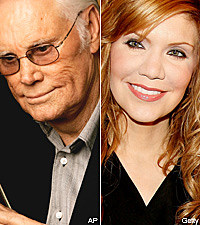 A CD tribute to songwriter and children's book author Shel Silverstein is in the works. Alison Krauss, George Jones, Ray Price and Emmylou Harris are among those already on board for the project. Bobby Bare and his son, Bobby Bare, Jr. are the executive producers of the album, which is slated for release on the Sugar Hill/Vanguard label in mid-2009, ten years after Silverstein's death at age 68.

World-famous for the children's books 'A Light in the Attic' and 'Where the Sidewalk Ends,' Silverstein was the Grammy-winning writer of Johnny Cash's 'A Boy Named Sue,' and earned an 1991 Oscar nomination for the country song, 'I'm Checkin' Out,' from 'Postcards from the Edge.' Other hits penned by Silverstein include Loretta Lynn's 'One's on the Way,' and 'Cover of the Rolling Stone,' by Dr. Hook and the Medicine Show. In 2002, he was inducted into the Nashville Songwriters Hall of Fame.

Other artists expected to contribute to the project include Black Keys, Band of Horses,Dr. Dog, Andrew Bird, Kris Kristofferson (backed by members of the Silver Jews) and My Morning Jacket.