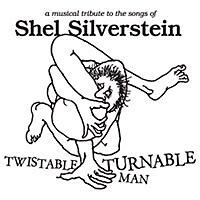 Poet, author, illustrator and hit songwriter -- the late Shel Silverstein was all of those and more. Now Sugar Hill Records is releasing a collection with the tantalizingly tongue-tied title, 'Twistable, Turnable Man: A Musical Tribute to the Songs of Shel Silverstein,' shining a serious spotlight on his classic collection of country compositions.

Shel (who died in 1999 at age 66) composed hits for the likes of Johnny Cash ('A Boy Named Sue'), Loretta Lynn ('One's on the Way,') and Dr. Hook and the Medicine Show ('The Cover of Rolling Stone'), among others. But it was Bobby Bare who first partnered with him for the classic 1973 album 'Bobby Bare Sings Lullabys, Legends and Lies' featuring songs entirely penned by Shel and featuring Bobby's duet with his then-five-year-old son Bobby Bare Jr., the Grammy-nominated 'Daddy What If.' The song is revisited on the tribute by the now-grown son and his own four-year-old daughter Isabella, making her the third generation to pay homage to the legendary writer.

In addition to country music icons Ray Price, Kris Kristofferson and John Prine, the tribute album features pop-rock acts Dr. Dog, My Morning Jacket and Andrew Bird. Says Bobby Bare, Jr. of the eclectic blend, "The lineup is a mix of people I have on speed dial, and people my dad has on speed dial."

'Twistable, Turnable Man: A Tribute to the Songs of Shel Silverstein' will be released on June 8.

Filed Under: Shel Silverstein, ShelSilverstein
Categories: Albums, Country News
Comments
Leave A Comment
Back To Top
Who Is Valerie June? 5 Things You Need to Know