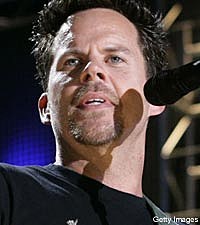 One of Gary Allan's best character features is his loyalty to friends and musicians. In fact, his new album, 'Get Off on the Pain,' features nearly all of the same session players as most of his previous discs.

"The guys that I use are by far my favorite players on the planet," says Gary. "I feel like I've got a Ferrari in every seat, and if you play me something and I don't like it, I can go, 'Man, I hear this. Can you do this?' None of the guys have any ego. I feel like they can make a 180 [degree-turn] for me and play me whatever it is that I want. And they're truly in there to try to make my record, so I think that's a testament to the players."

It's also a testament to the artist, because even though some of Gary's songs may have a tinge of familiarity to them -- as any true artist's would -- they're quite different when it comes right down to it. He recognizes the fact that as the singer and often the writer, you have got to give the musicians songs that spark their creativity in the studio.

"I've also heard those same players on some things where they sound like they're bored, so I think you've got to challenge them, and make it exciting that day and get their hearts into it."

Gary's new album, 'Get Off on the Pain,' debuted at No. 2 on the country charts this week, and he's beginning to hit the airwaves with his new single and title track.

Filed Under: Gary Allan, GaryAllan
Categories: Country News
Comments
Leave A Comment
Gary Allan Splits From Longtime Record Label UMG Nashville
Top 10 Father’s Day Country Songs
20 Father-Daughter Dance Songs That Are Perfect for a Country Fan’s Wedding
10 Country Albums That Turned 20 in 2021
Gary Allan Gets Engaged to Girlfriend Molly Martin: ‘She Said Yes’
20 Hit Songs That Were Almost Sung By Other Artists
Where Were You on 9/11? Country Stars Remember
The 10 Sexiest Songs in Country Music
Gary Allan Kept Losing His Voice While Rehearsing for His Return to Live Shows