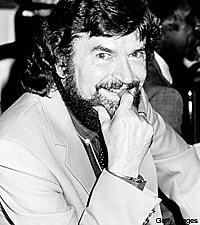 Liz Scott is the coordinator of a campaign to honor Phillips by putting his image on a postage stamp. She launched the effort three years ago, and says she currently has over 10,000 signatures. While fans of all musical genres worldwide have signed the petition, much of the campaign's support has come from enthusiastic Elvis fans, which Scott says is only natural.

"Sam loved all of the fans of his artists, but he was particularly partial, I feel, to the Elvis fans," she says, adding that Phillips, who died in 2003, was "a first class man; in everything that he did."

Kelvin Holly, longtime guitarist for Little Richard, who has also worked with Tina Turner and the Allman Brothers, among others, says of Phillips, "He gave us the first 'rock star' really. There might not have been a Beatles or a [Jimi] Hendrix if it hadn't been for Sam Phillips. He really is the Father of Rock 'n' Roll."

Phillips was among the first inductees into the Rock and Roll Hall of Fame in 1986, and is also a member of the Country Music, Rockabilly and Alabama Music Halls of Fame.

The petition, which will be online through the end of the year, is available at MySpace or www.gopetition.com.