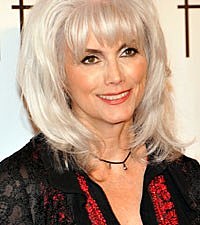 According to TMZ, 65-year-old country legend Emmylou Harris was investigated by California officials after an Oct. 1 car accident.

The site reports that the singer allegedly hit into another car while driving a rental car on a Los Angeles freeway and drove off without stopping or exchanging insurance information with the other driver. Therefore, the California Highway Patrol opened a hit and run investigation after the other driver filed a report on what happened.

The file will be sent to the District Attorney, who will decide if Emmylou should be prosecuted.

Emmylou's rep confirmed to TMZ that she was involved in a "minor traffic accident" and acknowledged, "She unintentionally rubbed bumpers with another vehicle." The rep said that the singer left the scene because she didn't realize the cars made contact, adding that it's a "garden-variety accident that happens everyday on the 405."

No other information was readily available.