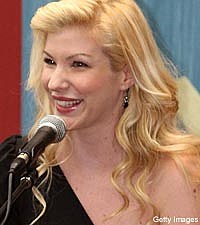 Emily West doesn't mind wearing her heart on her sleeve -- or in her songs. The Iowa native's new single, 'Blue Sky,' gives listeners a bit of insight into the personal turmoil she experienced watching her parents divorce after 32 years of marriage.

"That time period was devastating and so difficult to go through, but I needed to let go and just write my pain out on paper," she says. "I'm happy to have experienced the healing process of creating such a personal piece of art and only hope it touches someone else's life."

The song, written with well-known hit-maker Gary Burr, was the only way she knew how to get through such a difficult time. "I wrote it because I didn't have any money to go to therapy," she admits. "There's something really powerful about saying, 'I'm not your blue sky anymore. I'm not going to be the good thing in your life.' I have a love/hate relationship with this song because it's so real."

One person it did impact is her fellow labelmate, Grammy-winner Keith Urban, who shared both his guitar skills and his vocals on the song. "Emily West is an original," he boasts. "She had this song she wanted me to hear and it was 'Blue Sky.' I just loved it."

Emily's debut album will be released later this year.