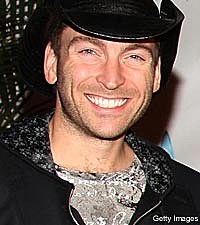 Emerson Drive's David Pichette will soon be even more outnumbered in his household! The fiddle player has confirmed exclusively with The Boot that his wife, Jill, is pregnant with their second daughter, due in October.

"My daughter Emma is now 19-months-old, and she is growing up so fast," David tells The Boot. "She is just unbelievable. Now we've got another one on the way. I'm excited! My daughter is going to have a little sister ... I'm very, very lucky."

David and Jill have not decided what they're going to call Emma's little sis just yet. "We have a few names picked out, but it's one of those things you decide in the last 48 hours," David says. "That's when you really make up your mind. That's probably what's going to be happening this time around."

Little Emma Pichette has had plenty of experience on how to handle a newborn baby. Jill's twin sister, Jana, is married to Emerson Drive's lead vocalist, Brad Mates, and they just became new parents to a baby boy in April.

"My daughter has been practicing with little baby dolls rather than babies," David explains. "Obviously, because Brad and I are family, when his son was born, she saw this baby that was actually alive. She was like, 'Baby!' Then she pushed him. We were like, 'No, no you can't do that!' But now they love each other. She's always kissing the baby, so it's great."

Emerson Drive's new single, 'That Kind of Beautiful,' hits radio airwaves August 16. A video will accompany the single and will feature Emma, as well as Jana Mates when she was pregnant, and drummer Mike Melancon's wife and father-in-law.