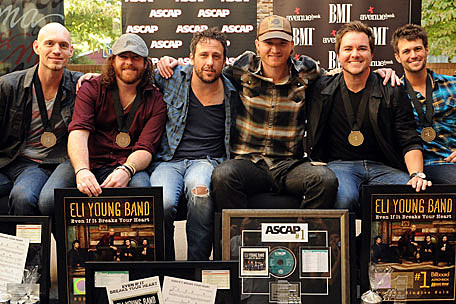 It was a festive occasion for the Eli Young Band Monday night (Aug. 20) in Nashville as they celebrated their second No. 1 single, "Even If It Breaks Your Heart," with songwriters Eric Paslay and Will Hoge. The single followed the success of their first chart-topper, "Crazy Girl," which hit No. 1 last November.

"The song is positive and doesn't talk about setbacks," the group's James Young tells The Boot. "That is a goal and dream that we could identify with completely," adds Jon Jones. "You can tell it comes from real life experiences."

Mike Eli agrees, saying, "We didn't have a formula to go by. We just knew you got into a band, you went down the road in a van and you wrote a few songs. There was that innocence in the song that we understood."

Mike acknowledges that the song is very much the soundtrack of their life as a band, despite having been written by Eric and Will. "When we decided to record the song, it was a selfish decision. We felt empowered by this song and that's why we wanted to record it. Did we know it would be our second No. 1? We did it because it told our story and we felt empowered and wanted to cut it."

"It was a subject we wanted to cover," notes Jon, "but we felt there was no way we could write the song as well as Eric and Will did. We loved the idea and it was captured so perfectly we couldn't pass it up."

"It couldn't happen to two nicer guys," James insists. "They've become great friends of ours and it's fun to get to share this with them."

Will calls the song his paean to rock 'n' roll as life's true calling. As solo artists with building careers, both he and Eric have been singing the tune for some time in their individual shows, so fans are hearing it from all sides these days. It's also not unusual to find them on the road with the Eli Young Band.

While this is Will's first No. 1, Eric celebrated his first last November, the same month EYB heard "Crazy Girl" was headed to the top. Eric co-wrote Jake Owen's "Barefoot Blue Jean Night" with Dylan Altman and Terry Sawchuk. They celebrated that song's success in the same spot where he partied last night, the lobby of the CMA building.

Eric and Will, along with the band, received numerous plaques, medallions and accolades from their publishing companies, performing-rights organizations BMI and ASCAP, record label and various industry reps including Country Radio Broadcasters and the CMA.

Watch Eli Young Band's "Even If It Breaks Your Heart"

Sign Up for Our Newsletter
Filed Under: eli young band, EliYoungBand, Eric Paslay, EricPaslay, Will Hoge, WillHoge
Categories: Songs
Comments
Leave A Comment
Back To Top