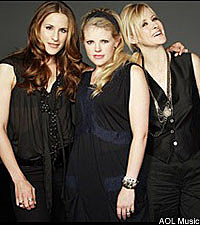 Talk about an all-star line up! Multiple Grammy winners Dixie Chicks and Keith Urban are set to join the Eagles for a summer stadium tour that's bound to be one ticket.

The tour begins June 8 in Toronto and continues through June 24 in St. Louis, Mo. The Eagles -- Glenn Frey, Don Henley, Joe Walsh and Timothy B. Schmit -- are expected to perform plenty of their hits, including 'Hotel California,' 'Desperado,' 'Life in the Fast Lane,' 'Lyin' Eyes,' 'Take It to the Limit,' 'One of These Nights' and 'Heartache Tonight.'

The tour also marks the first time in four years that Martie Maguire, Emily Robison and Dixie Chicks' lead singer Natalie Maines will perform together. Among the hits the multi-platinum trio are expected to dust off: 'Wide Open Spaces,' 'Goodbye Earl,' and 'Not Ready to Make Nice.' It's not know yet whether Martie and Emily, now recording as Court Yard Hounds will perform any of their new music during the show.

Keith will appear on select dates of the tour (which will not include the opening night in Toronto or June 22 and 24, the last two nights of the trek). American Express cardholders will have early access to tickets beginning at 10:00 AM ET on Monday, March 22 through 10:00 PM ET March 29.

For ticket information and other details go here.