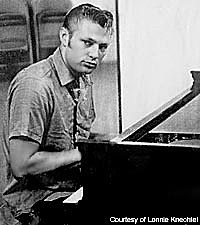 Larry Knechtel, a one-time collaborator of Elvis Presley's and an accomplished sideman in both the rock and country worlds, died Thursday, Aug. 20 at the age of 69. Knechtel, who won a 1970 Grammy award for his arrangement of Simon and Garfunkel's enduring 'Bridge Over Troubled Water,' succumbed to an apparent heart attack, according to a report by his local newspaper, the Yakima Herald Republic.

As a session keyboardist and bassist, Knechtel performed with a wide array of artists like the Beach Boys, Elvis Costello, the Doors, Billy Joel, Hank Williams, Jr., Randy Newman and Ray Charles. A member of 1970s soft rock giants Bread, Knechtel was cited early on for helping Phil Spector create his legendary 'Wall of Sound.' He remained active up until his passing, performing on the Dixie Chicks' 2006 Grammy-winning album, 'Taking the Long Way'.

Knechtel got his start as a member of the Wrecking Crew, a group of Los Angeles studio players that included future stars like Glen Campbell and Leon Russell and session drummer Hal Blaine. "It just snowballed. I was in the right place at the right time," Knechtel told the Herald Republic in 2004, the year after he relocated to Yakima . "It was a lot of fun. We were all young. I was making big money and hearing myself on the radio."

A posting on his official website reads, "Apart from being a brilliant musician, Larry was loved by many for his character -- honest, humble, hard-working and charismatic. He was a loving and devoted father and husband. Larry preferred a simple rural lifestyle and valued the quality of life. Those close to him knew Larry as a student of western lore and history, an outdoorsman, a farmer and a good neighbor. We will miss him dearly."

Knechtel, who frequently performed with bluesman Wayman Chapman, made his last appearance a week before his death as part of Yakima's Summer Concert Series in Franklin Park . Chapman told the Herald Republic that Knechtel, who died at Yakima Valley Memorial Hospital , appeared to be in good health and recently returned from a trip to with his wife, Vickie, and his grandson.