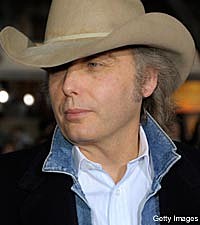 Dwight Yoakam looks at each album he makes as an artistic statement, rather than an album filled with potential singles. A perfect example would be his most recent release, 'Dwight Sings Buck' -- his personal tribute to his dear friend and mentor, the late Buck Owens, who died just months before Dwight began recording the album.

Dwight says he and his band would play a Buck song each night on tour as a tribute, and the unexpected result was an album of Buck's music. "We were also playing with pieces of other songs at sound check, just exploring his music. It was kind of like Buck's gift to me," Dwight tells the Houston Chronicle.

It's been two years since he recorded the album, but since then Dwight has been studying the changing landscape of country music. As he prepares to release some of the new songs he's written lately, Dwight is seriously considering tossing the standard album format -- and doing it like The Beatles once did on radio -- releasing his songs one track at a time, online, instead of making them part of a package.

"There's something freeing about that," Dwight says. "It was the way just about everybody did it [back then]. But that ended post-'Sgt. Pepper's [Lonely Hearts Club Band]'. My entire career, I've had to think about a record as 10 to 12 songs -- a body of work to be presented to a label.

Back in the 60's, the music industry made its money on the sales of singles. In today's era of iTunes and digital downloading, Dwight feels the pendulum has swung back toward the sale of individual songs. "The paradigm has shifted, but nobody's certain about where it shifted to. We know from what, but not to where. But I'm interested in looking into some different approaches. I've always been fortunate in that I can afford the time to let the music lead me."

Dwight notes another change in the musical landscape."People don't call them records anymore, do they? They're still records ... records of music. The same way an album is a collection of material. I think it's funny that people forget the original term wasn't a definition of the format."

A multi-talented entertainer, Dwight has also continued acting. Earlier this year, he worked on a film called "Provinces of Night' in North Carolina with Val Kilmer, Hilary Duff and Kris Kristofferson. The indie flick is expected to hit theaters in 2010.